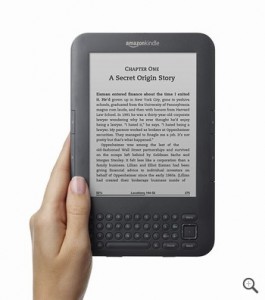 Outside of the current rave that is the smartphones and tablets, eReaders are next in line as the most popular mobile device among consumers. So if you’ve recently heard the buzz on them, but are not sure how they work, listed is everything that you’ll need to know about the various ereaders, ereader apps and ebooks.

Ereaders Are Not A Fad
As the tablet market develops and their sales begin to soar, there are a number of free ereader apps which allows you to read ebooks on a variety of these mobile devices, so experts are predicting that the actual ereader device itself may be on it’s way out.

There are reports however that ereader sales have actually jumped nearly 80% from the previous year, which equates to 6.7 million units in 2010, and they are predicting that there will be over 11 million ereaders sold in 2011.

There are also predictions that the sale of ebooks will surpass $3 billion by 2015, up by $1.5 billion. Amazon.com, who is one of the largest vendors of ebooks claim that their users are buying up digital copies of the Top 10 bestsellers books at two times the rate of print copies. Amazon also sells their third generation Kindle ereader, which is their best selling item in their history.

Nora Roberts the writer, has recently became just the third author to sell more than one million copies of her ebooks on Amazon.com’s Kindle Store. The New York Times is planning to add an ebook category to their bestsellers list this year.

Amazon Kindle And Other Ereaders
Amazon and their Kindle lineup paved the road for the ereader, but there are now plenty of other choices that are available for reading ebooks.

The Features Of eReaders Keep Improving
The features which are available, such as: annotating, bookmarking, high-lighting, taking notes, font or text adjustments, ebooks reading out loud, MP3 file support, and full Web browser capabilities are just a few of the ereader features which are currently available.

Manufacturers are now also building their ereaders on the open source Android platform by Google. Other features and trends include the integration of multimedia features such as animation and videos accompanying the text.

Although Amazon as of yet is embracing the libraries ebook movement with their ebooks, there are now a lot of public libraries who are loaning out the Amazon Kindles ereaders, as well as providing guidance on how to use them.

The iPad Plays A Part
Although technically, the Apple iPad is a considered a tablet, there is no denying that it’s an extremely attractive device as an ereader. The iPad has a 9.7-inch multitouch screen, which is great for reading ebooks, magazines, multimedia titles and comic books.

The iBooks app also gives access directly to Apple’s iBookstore for those wanting to buy and download ebooks directly onto the iPad. Also, Apple’s App Store contains a number of free ereader apps, including Amazon’s Kindle app, which allows users to browse and read Kindle ebooks directly on the Apple devices.

The largest influence on ereaders is price-related, as there are a lot of ereader manufacturers that are cutting their prices, just to compete with the versatile iPad. Borders for example, for a limited time, has reduced the price of their ereader, as experts predict that most will drop below the $100 barrier.

Lending As Well As Borrowing Ebooks
Readers of books love to share their good books with others, and the same is happening with the digital ebooks as well. Barnes & Noble’s even has a LendMe program, which allows their users to share ebooks for up to two weeks. Amazon has also launched a similar ebook Lending program for the ebooks that qualify.

With these programs, the borrowers do not even have to own a dedicated ereader to be able to read the title; they are also able to use a computer or mobile device, provided they have the appropriate ereader app. Also, there are numerous ebook lending-based Web sites which are popping up, which matches lenders with borrowers.

The Gift Of Giving An Ebook
Lending ebooks isn’t the only option available for sharing other readers with ebooks. Amazon recently introduced a gifting feature which enables anyone to purchase an ebook from their site as a gift, regardless if the receiver of the ebook owns a Kindle ereader or not.

Buyers just need to shop in Kindle’s ebookstore, and then use the ‘Give As A Gift’ feature. The receiver can then read the ebook either on a Kindle, a computer, or a mobile device using the free Kindle app.

Google’s Influence On The Ebook Market
Google has also made some moves in the ebook sector. They have recently bought an online publishing company called eBook Technologies. Google has also launched the Google eBookstore, which is cloud based. Google’s ebookstore has close to 3+ million free ebooks in it’s database, as well as thousands of titles that can be purchased.

Google’s approach will allow their buyers to read the cloud-stored ebooks directly from a Web browser, meaning that there is no need for an ereader device. Furthermore, those with ereaders that support the Adobe eBook based platform, which also includes the Sony and Nook eReader models, will be able to read the Google ebooks as well.

Epaper And Digital Color LCD’s
Monochrome epaper and color LCD’s are the primary screen options available for the majority of ereaders. Epaper, which the Kindle currently uses, is considered a lot easier on the eyes, as well as being better for reading in sunlight, while using less power than the LCD’s, which the Color Nook supports. Epaper obviously lacks the vibrancy of color however.

Kobo eReaders
If you are not familiar with the Kobo ereader, that may soon change. Besides they offering a basic Wireless ereader device, Kobo also offers a cloud-based platform which operates on an open source, device neutral philosophy. This means that the titles that are in Kobo’s ebook store, which has more that 2.15 million selections including magazines, newspapers and over 1 million free titles, are compatible with a variety of ereaders and computers, Blackberry’s, Apple and Android via apps.

Kobo also recently announced that it had secured relationships with over 12 different ereaders, as well as with tablet makers and mobile operators. It’s estimated that Kobo’s ereader would be preloaded on almost all of the devices in the very near future.

Why Induction Stove CookTops Are Hot - A Guide