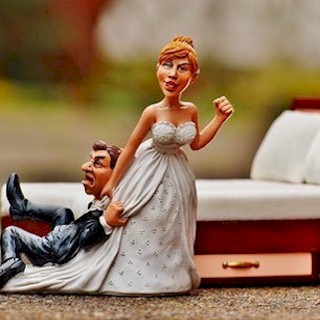 Most marry because they think they have to. The long term affects aren’t usually taken into consideration. You love the person, are somewhat compatible, so that’s good enough to spend the next 60 years of your life with? This through thick and thin, for better or worse, in sickness and in health.

That’s quite the commitment. So how do you even know you’re marrying the right person. Realize that divorce is now at a 50% percent rate. It’s your life, so you need to at least weight out all the pros and cons before tying the knot. Get to really know that person you’re about to marry. What you need is to at least clinically think about it.

So what’s been established are a series of questions, this before walking down the aisle with full conviction. They’re centralized queries that both sides of the couple will benefit from, ones to explore before saying “I Do.”

These were compiled by consulting from experience. Mommy, who you many eventually run home to, as she says “I told you so,” as well as marriage counselors, and divorce lawyers. Beyond love, what needs to be dealt with are debt, conflict, and family.

Agree On Household Chores
Most couples already have this ironed out, this since when it comes to modern day love affairs, they’ll usually “shack up” before getting married.

But what people have are strong views on which chores that they’re willing to do. Mowing the lawn is too strenuous and “mans” work, while you’d rather wash the windows, cook, but hate doing the laundry.

What some assume is that the other will automatically do certain chores. Most don’t realize that chore division is one of the precursors of arguments, and at times even divorce.

Balancing Work And Home
Provided you have a flourishing career and not just a job you hate. What different occupations does is demands different levels of commitment. If you’re single, then your workload might be manageable, but what happens if you have a spouse and kids.

Knowing how your partner prefers to balance their work and home life, becomes important. The quality of the relationship can be inversely affected when it comes to work, home, and family.

It’s found that couples have more satisfying marriages, this once each others work and home preferences, are known.

New Lifestyle Habits
What if you choose to get healthier and start jogging, stop eating dessert, develop a fondness for kale, then how would your partner handle this, especially if they’re not interested.

What’s known is that for some couples, if there are drastic changes in health related behaviors such as weight loss, what’s elevated is tension. What happens if one partner decides to adopt new eating or exercise habits, while the other remains stagnant and refuses to change.

What this can cause is annoyance, frustration, and conflict. So consider your health habits along with goals, with those that your partner has. If there’s discontent, then you need to resolve these challenges.

How Well Do You Know Them
When dating, what both sides will show is their best shiny lovable side. Once married is when the triggers, traumas, and daggers come out.

The quality of adult relationships aren’t isolated experiences, but are directly tied to the individuals personality history, which includes all their previous traumas.

They could of been abused in the past, and once it’s triggered somehow, can activate and lead to emotional flooding, as the quality of the relationship deteriorates. So what’s vital is knowing each others trigger buttons, so they can be avoided.

Management Of Finances
Know how much of a financial safety net that you need to feel comfortable, this when growing older. What’s needed for open discussion are spending habits and handling of debt, along with discussing ones saving preferences. How much money do you need to feel secure.

Another point of mistrust, is how wealthy each of the parents are. There’s massive divide once it comes to inheritance, this especially if one set of parents are wealthier than the other. Financial disagreement has traditionally been the strongest predictor of divorce.

The Battle Of The Breadwinner
Don’t marry that aloof oaf, if you think you might need to potentially be the primary breadwinner, as it’s one of the bigger forecasters of disagreement. This could be because the spouse is unable to find work, or can’t work due to health issues.

What’s also known is that in this age of gender inequality, what still remains is the social and financial expectation that men are still the breadwinner. This especially becomes true if the couple is expecting a child.

Then there’s the dangerous game of comparing incomes, this especially if it breaks the traditional norm of men earning more income than women.

These findings are however based on traditional data, and may be different for the modern couple. What’s known for certain, is that woman are now increasingly becoming the breadwinner, and no longer an issue.

For the majority however, there needs to be a conversation regarding identity, masculinity, ego, and who earns the money.

Know What To Expect When Married
More often than not, people will honestly say what they like or dislike. What they state, is usually what they genuinely feel for real. If they don’t want to move to another city, then they most likely mean it.

If they originally say that they don’t want children, then it’s not likely to change after you’re married. If you think that getting married will alter these attitudes, you’re usually wrong.

How To Alter Your Mindset Convincing Yourself To Exercise More