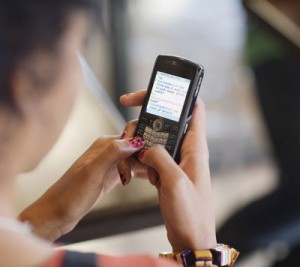 Text Messaging to mobile devices is an excellent viable marketing channel and promotional tool. To begin with, the majority of cell phone users, close to 85% percent of mobile phone owners, have recently texted someone or received a text in the past day. Texting also offers an immediacy and promptness where sending an email to someone doesn’t have. When you have a mobile device and someone decides to send you a text message, what you’re going to do is read it as soon as possible.

Also, every mobile device is able to send as well as receive text messages, while only smartphones which are Internet-enabled can access web based mobile commerce sites, and those consumers who owns a certain type of smartphone are only able to use mobile apps. For instance, only those who own iPhone’s can use iPhone apps, which makes it extremely limited.

Getting In On SMS Texting
Retailers who are currently sending out texts as a marketing method are sending out messages offering discount coupons, immediate special deals or participation in a new contest. Some merchants will also send out links that’s embedded within their texts, which will directly take their consumers to a loyalty based program site.

Retailers are also able to have instant two-way communication using text messaging which is practically impossible in print or television based advertising.

Since each and every text recipient can be uniquely identified and personalized, retailers are able to build up a profile on the consumer, this based on their text replies and/or requests.

Retailers especially benefit provided that they’re able to connect the back and forth texting activity to bond customer relationships programs which they’re implementing. This allows for greater personalized communication along with offers directly to their consumers.

Which Retailers Are Texting
Nonetheless, there are just a few merchants who are using text messaging as a marketing tool. There were just 14% percent of over 200 retailers who were surveyed who said that text marketing was a part of their mobile commerce arsenal. This compares to close to 48% percent who currently have a mobile website presence, and 39% percent who operate a mobile app.

Also, there were only 15% percent who claimed that they will increase or explore text marketing in the near future. What this results in is that there’s just a handful of mobile device owners who are currently receiving texts from merchants.

There were also close to 75% percent of consumers who don’t receive any type of text messages from any retailers or marketers whatsoever, this according to mobile media marketing experts.

Retailers may be currently shying away from texting since the consumers are having to “opt-in” to be able to receive their messages. These retailers are currently not able to purchase lists of text subscribers as they’re able to for say a direct mail list. It also obviously takes a good amount of time to build up a subscriber list of any kind as well.

Those Who Are Participating
The retailers who are participating in text marketing claims that it can be an effective targeting method, especially when they’re promoting their texts through a variety of different marketing channels.

Some retailers for instance are placing their promotional messages regarding their text offers in the e-mails that they sent out to their customers, while also posting the message on their Facebook fan page and Twitter accounts as well.

More Retail Participation Needed
Mobile marketing experts are claiming that retailers should be promoting their products via text messaging campaigns, anywhere that they possibly can, including online as well as directly in their stores, this to reach as many consumers as possible.

Texting should also never been considered a standalone element. Text messaging campaigns should always be done in tandem with your other promotional efforts which you’re currently doing.

Larger Retailers In The Texting Act
There are currently large prominent retailers who are absolutely plastering their text campaigns to the masses wherever and whenever possible, even placing them on shopping bags and on their eCommerce sites.

Consumers who happen to be shopping inside the stores will likely have their cell phones with them, so the same type of collateral promotion is essential. To get more consumers to opt-in to receive their texts, retailers need to make their text marketing programs as visible as possible.

For consumers to sign up to receive active texts from a retailer or marketer, all they need to do is text a word, something like SIGNUP, by using the short code which would be 727272. A short code in the texting world is a truncated phone number which is used to automating the text messaging.

For the end user to unsubscribe, if they’re wanting to stop receiving any further text messages from the retailer, they can just text STOP on the same code. Some retailers are offering monthly freebies or coupons as an incentive to get new subscribers.

They will also usually get priority special announcements which are texted directly to the users mobile phone. These retailers as well as marketers are able to offer text based messaging programs on any type of promotional material that they want, which includes direct mail or print ads.

They can also include the short code as well as some brief marketing material which describes what steps to follow as well as what the consumer will receive once they opt-in to receive their texts.

Why You Should Lose That Annoying Big Ego