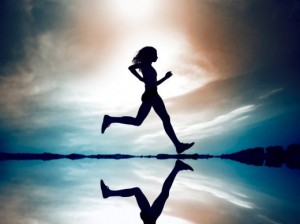 After the mind over matter takes place, once the pain in your muscles goes away, you then begin to comfortably drift into your daily 50 minute Run. You begin to visualize and compensate, taking your mind off the pounding on your legs. You begin to slowly trace over the route of your run, the trails in the park, or the blocks in the downtown streets.

You wonder if all those relationships over time that you once had could of ever worked out. Then suddenly, as practically as you move one foot and then transfer it to the other, you get an idea on what you’ll prepare for dinner that night, or fantasize about that transcontinental flight into the Pacific. You then pick up your pace and begin framing the topic of your next article.

Jogging The Brain
Writers as well as creative artists will routinely lubricate their creative juices and accelerate the process with exercise, specifically running or by doing intensive cardio. If anyone ever asks you why you jog, just tell them because it’s faster than walking. Some are just fond of long contemplative power walks through the forest in the rain.

Most mornings, those wanting to get a jump on their day will spend up to an hour to run several miles, to get inspired and reflect on the upcoming day. There are fitness buffs of all sizes and shapes, from different backgrounds and professions who know that the best, free and most precise method of unlocking creativity, is to drain a little sweat by going for a run around the seawall.

Scientific Proof From Exercising
There is also mounting scientific proof for what many of us already know, and that’s the absolute eureka moments you get when performing strenuous exercise, and it’s much more than just an anecdote.

It has been proven that just a single run can create enough force to kick the Jesus into the average college student, placing them into an entirely higher gear, the benefits lasting a few hours. So for you kids out there, next time you’re prepping up for a major exam, go out for a run or a bike ride. You see, to be able to function properly, or to be near peak performance, what the brain needs is a physical jolt.

So if you ask a group of runners, you’ll most likely find that these type of insights are quite common, so such so that they will usually take them for granted. It’s also most disconcerting when you’re most likely miles away from your home or office when these flashes on brilliant insight strikes you.

It’s often been said that whenever a great idea hits you during your daily run through the park, it’s important to just stop for a moment to bank it in your memory, or carry a pen and pad and write down your new idea.

Where The Ideas Formulate
This type of creativity usually tends to be derived from a two-stage process. The first being the data gathering process where you’re feverishly whacking your brain to decide the background material which you’ll need to solve your particular problem. Then the moment of insight will come to you, once you forget about it for a while and drift off into other thoughts.

This is most likely because of the preparation stage, where the thought process is so focused that it will ignore random associations which may be percolating in the subconscious. But by definition, creativity is the process of making leaps which are unexpected.

When you deliberately work on a problem or a situation, these other thoughts may seem like distractions, so you decide to tune them out. So to be able to free up the mind, you’ll need to schedule the “idle time,” such as doing something completely different, such as listening to the music on your iPod.

Those who study sports psychology compares this as a meditative state. So what it does is it places the analytical, logic thinking left brain on hold, while giving the intuitive right brain full rein.

What exercise, particularly jogging does is it unlocks creativity, and the longer periods of time that you do it, it tends to react better. What running around a track does is it will pump enough blood into your brain to force you to focus that much more. It will increase the quality of whatever your studying, or whatever else you’re wanting to do.

Your Brain Needs Juice
Whats been always known is quite simple, and that’s the brain as a muscle needs large amounts of energy to kick start itself. Imaging tests at medical clinics will confirm that certain workouts like stationary running on a treadmill will flood the brain with oxygen and blood. Cardio exercises will increase the activity in the frontal lobe of the brain, that’s the part which is involved in complex attention and reasoning.

Experiments with rats which are forced to exercise more will learn to complete the mazes much quicker than the sedentary ones. The same goes for other experiments where monkeys will learn close to twice as fast when placed on a treadmill. What happens is the neurons will grow new connections, which is also useful when the brain needs to reroute itself when aging.

What jogging does is it will stimulate the production of all the vitally important brain chemicals, such as BDNF or brain derived neurotrophic factor, which will encourage the growth of new nerve connections in the brain. So what that means is exercising on a regular basis helps the brain keep young, which is the main reason why runners have lower rates of Parkinson’s and Alzheimer’s disease.

So the very existence of such chemicals residing in the brain proves that the benefits of running isn’t some urban myth or an old wives tale, or that it works on just certain people, but not always on others. So if you’re wanting to create these chemicals to develop new creative patterns, then all that’s required is putting on your running shoes and working up a bit of good old sweat.

The Mayan 2012 End Of The World Calender Predictions