Why Is True Happiness Associated With Material Possessions
Skip to content 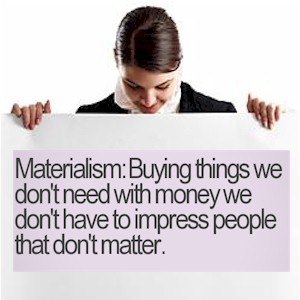 Mass media and it’s advertising teeth leads us to believe that shopping to our hearts content, buying to excess usually on things that we don’t need or afford, thus becoming materialistic, makes us happier. And we all want to be happier then we are, right.

We all usually make ourselves happy from completely different ways than others will. The shrewd marketers, however, has us believing that we continuously need to own newer and better things, which are usually more expensive, so we’ll be more satisfied.

Experts however won’t confirm or offer their support on this idea that owning more tangible goods is better. There’s research which supports those who seek happiness based on material possessions, are actually more dissatisfied with their lives.

So what’s been investigated was the relationship between being unhappy and materialism, and if these individuals are truly not as happy. What was also studied was what actually made people genuinely happy, instead of the promise of happiness which hardly ever delivers.

The Definition Of Materialism
Materialism is the need of owning possessions, usually luxury items better than what their friends or family own. The theory being the more or the better “things” that you own, the higher your status will be.

The research which was conducted based on this revealed a common trend, and that being the majority of people who were materialistic actually weren’t as happy as those who didn’t bother or believe in materialism.

It was also found that individuals who were materialistic generally weren’t as interested in actual life experiences, such as that long dreamed of vacation, or that once in a lifetime sporting or concert event.

Materialism is usually associated with narcissism and ego, but they also somehow tend to experience more physical ailments, such as, backaches and headaches, sore throats and sore muscles.

So with these clinical results in mind, the mass media advertisers proclaiming that buying more makes you happier, isn’t as credible.

Materialism And Well Being
So the most reasonable query when it comes to materialism is why there’s a reduced level of well-being, and why it’s associated with being unhappier, at times causing anxiety and even mild depression.

The reason may be because what materialism does is it isolates these individuals from bettering their personal growth, and not being able to bond better with their family and friends.

It’s been found that materialistic people tend to have underdeveloped social and interpersonal skills as a result. They’re known to be more individualistic, and focuses less on community or social involvement, which leads to isolation.

Materialism And Insecurity
Another common denominator between materialism and personal well-being is insecurity. Materialistic individuals are generally more insecure and will use their possessions so they can impress others, which makes them feel better.

But what these individuals don’t know or realize is that this “showboating” strategy can ultimately backfire on them, this because their prized possession loses the it or trendy factor, or isn’t expensive enough, which then fails to impress.

The materialistic person once they become aware of this becomes worried and begins to feel insecure about how successful they really are. Then they become more self conscious when in public, experiencing increased social anxiety.

The end result is they become more insecure, and conversely, those who feel insecure responds with increased levels of materialism, shielding themselves with new products.

Just gaining more self-esteem has proven to reduce the need to be materialistic, resulting in we becoming more secure about ourselves since less value is placed on material possessions as a means of being happier.

People Always Need To Connect
People by nature are social animals. We all have a need to build and fulfill relationships with others in order to survive and thrive. Materialistic individuals will however choose to substitute relationships with possessions.

They use or display these possessions in the hopes that they can gain better relationships with the “right” people, by they thinking they’ll gain respect if they own that flashy new car, or the latest iPhone.

Once they do this, what they’re doing is setting a path to unhappiness since their valuable possessions can’t love them back, and because there’s always a better, bigger, faster “object” which they don’t or can’t have.

We grow up thinking that what makes us the happiest is finally owning that ocean side cottage which we most likely can’t afford. Then we realize that it hardly ever works out or is worth it, this since being happy is more of a state of mind, and not owning something in order to be fulfilled.

So this isn’t saying that you shouldn’t go out and purchase those luxury items, or not treating yourself to something spectacular just because you think I’d be a fun thing to own.

The media has us believing that material possessions are more important than experiencing something, and that’s what gives us true happiness. But we now know how transparent that thinking is. If we actually believe that we need a certain product to make us happy, we’re then just fooling ourselves.

How To Avoid The Cold And Flu Season After The Holidays