Why Exercising Becomes Mandatory When Reducing Hypertension
Skip to content 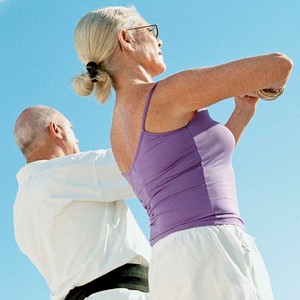 In the hectic world that we live in, the majority of us are leading a lifestyle which leads to high blood pressure and hypertension. As the population ages, the situation worsens. It’s estimated that close to half of the elderly experiences forms of hypertension.

What having hypertension does is it elevates the odds five fold of having a stroke, developing heart disease or heart failure. The biggest issue being that the majority don’t realize that they have it, this since they don’t feel any symptoms or have any direct pain.

Eventually, what the increasing force of the pressure does is that it begins to damage the interior surface of the blood vessels.

However, according to experts, hypertension doesn’t necessarily need to be a predestined course. Effective immediate steps can be taken, and be as easy as reducing one’s salt intake, while adopting a desirable dietary pattern of losing weight, and having a set exercise program.

Obviously, eliminating bad habits while eating a low fat diet does help, but it’s found that the most significant difference one can make to reduce hypertension is by adopting an exercise program.

What performing various exercises does is that it not only strengthens and improves the limb muscles, but more importantly, what it does is it enhances the health and strength of the heart muscles.

The Heart And Exercising
What exercise does is it stimulates the development of new connections, this between the impaired and the normal blood vessels. As a result, for those who exercises on a regular basis, all had better blood supply which flowed to the muscle tissues of the heart.

What the human heart basically does is it supplies a flow of blood to the damaged areas of the heart when faced with incidents of “myocardial infarction.”

Heart failure is a condition where the heart muscle or the myocardium doesn’t get enough oxygen along with other nutrients, so it begins to not function as well, and then eventually fails.

For this reason alone, based on a series of tests and considerations, researchers have observed that doing any type of exercise stimulates the development of these life saving detours when it comes to the heart.

One study showed that doing just moderate exercises several times a week, has proven to be effective when it comes to building up and strengthening these auxiliary pathways. Moderation at times is found more effective than performing extremely vigorous exercises, provided it’s done twice as often.

Others argue that this always isn’t the case, as there’s clinical accounts of marathon runners, for instance, who suffer from hypertension. Exercise alone isn’t able to overcome the combination of other risk factors.

The Causes Of Hypertension
At times, there are abnormalities of the kidneys which are thought to be responsible. There’s also studies where the researchers identified additional common contributing factors such as obesity and heredity.

So what is the solution to lowering blood pressure while avoiding the risk of developing hypertension. It appears that exercising is the best tonic, and what all the doctors, dietitians, physiotherapists, and health advisers insist.

So if this is what you’re wanting to do, to incorporate and adopt the various methods of preventative maintenance, and then introduce them into your current lifestyle in the attempts to reduce the risks of hypertension, then starting with a routine exercise program might be the key.

But before you begin, make sure that you follow certain precautions, as it’s recommended that you review and adopt a series of steps before getting into action.

First Check With Your Doctor
Make sure that you consult with your doctor first before beginning any type of exercise program. This because if you make any sudden or significant changes to your current level of physical activity, particularly introducing changes which are too drastic for your circulatory system, it may cause issues.

Start Slow Take It Easy
Always begin with a slow and comfortable level of exertion and then begin to progress gradually from there. There are programs which are designed in several stages, which allows for a progressive increase in activity.

Knowing Your Limit
Establish your safety limits when it comes to exertion levels. You will develop clues such as developing sleep problems or extended fatigue the day after a workout, which may indicate you may be overdoing it.

Once you know your parameters, make sure that you stay within it. Over exercising can be both dangerous as well as unnecessary.

Adopting A Set Exercise Program
Say that you’ve established what your best optimum exercise program is, for instance, a minimum of three times a week to a maximum of five times a week, which gives you the best benefits.

Once you work towards your peak condition, these set workouts should then be able to maintain the best muscular benefits. However, when it comes to cardiovascular fitness, it usually requires more frequent activity.

Exercise Within Your Capacity
It’s found that the optimum levels for those new to an exercise program, this especially for the elderly, is performing peak exercises which are within 40% to 60% percent of their capacity.

To reduce hypertension, it’s known that weight loss and weight maintenance through exercise is an excellent starting point. Experts claim that being overweight, especially for the elderly is linked to an increased risk of developing hypertension, and that losing weight decreases the risk significantly.

Are The Steps To True Success Obtainable Or Sustainable