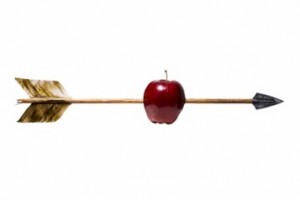 Apple’s can be delicious. Apple has been absolutely soaring lately and will be reporting enormous profits once again, which is becoming routine every quarter. This thanks to their ground breaking market changing products such as the iPhone and recently the iPad Tablet PC, where sales has now exceeded well over 7.5 Million units.

But there are some out there who are holding out and waiting for a better tablet. Google and their Android devices has managed to attract a fairly significant following, this primarily because their platform is completely open to developers, while Apple insists on maintaining an Iron Fist somewhat closed society on their OS.

It’s easy to appreciate Apple’s industry leading ingenuity of their products, and since the iPad is still the tablet to beat, there really isn’t any worthy Android tablet that’s currently able to challenge them. But there are still quite a few lingering Anti-Apple folks out there who still refuse to jump on anything Apple.

Why So Anti-Apple
A typical household may have a computer PC, a laptop or a netbook, maybe a Kindle ebook reader along with a couple Android based smartphones. The reason being that you can still purchase a laptop and the Kindle for just a portion of what a new iPad with all of the bells and whistles would cost.

Aside from the trendy “cool” factor of packing around an iPad, showing off its large multi-touch slick shiny screen, while getting that nod of approval from the hip chicks and dudes out there, there still is no justification for some to buck up their hard earned cash for another luxury device which doesn’t really provide that much functionality.

The Market Will Eventually Level Out
For what’s currently available out there on the market, the pricing of the iPad may not be that bad, especially if you compare it to what the other tablet manufacturers are charging for their Android based devices.

However, there are lingering suspicions that the entire tablet market is completely overpriced right now, and the majority of the potential tablet buying consumers are just waiting for the prices to start dropping. For this to happen, it will take an extremely serious competitor to the iPad to be able to make something like that happen.

If you look at the current lower end netbooks and their prices, and then compare the tech specs which they offer, and then compare that to the iPad or the Android based tablets which are available, it’s not unreasonable to think just based on that alone, the prices of the tablets should begin to drop in the next year or so.

The Accessories Add Up Pretty Quick
This is one issue which the majority of iPad owners can all agree on. You place down your $500 or so dollars to buy this revolutionary magic computer box, and then they’re required to spend at the very least a few hundred dollars more on accessories.

They need to purchase a protective cover, or a Bluetooth operated keyboard, as well as any other “nickel and dime” additions just to bring it up to the functionality that an entry level netbook can provide.

Sure, the netbook may now be considered so… “2010,” and by most standards, a bit clunky, clumsy and not really that pretty looking, but it does get the job done for half the price.

Most Are Still Waiting For That “Killer” Android Tablet PC
For the majority of those who are online, their lives are pretty much dictated by Google, so as a result, they will naturally gravitate towards what they have to offer.

Most waited in anticipation for the Android powered Motorola Xoom, the Samsung Galaxy and any other highly touted tablet to hit the market. The results so far has unfortunately been a tad disappointing based on the not so great industry reviews, or from actual hands-on user experience.

But sometime soon, someone will eventually get it right. Some manufacturer will offer that ultra perfect Android based tablet that will hit all the marks, and then the app developers will soon follow, and then everyone and their dog will lineup to get one, it’s just a matter of time.

Anticipating The Next “Big” One
There are a few industry experts who are predicting that something bigger is about to happen, and it may be just around the corner.Something big enough to give the mighty iPad a run for its money.

It may not even be a super-duper Android based Tab which will do everything but your laundry, but instead, perhaps something completely out of left field such as the upcoming Amazon tablet.

Amazon is promising their device will marry the best features of what the iPhone and their Kindle ebook reader offers, along with a few of the concepts which is borrowed from Android, the release date, TBA.

Or, there could be an Anti-iPad device on the horizon which could possibly be in the form of a killer, dockable Super Smartphone. A powerful portable electronic “Swiss Army Knife,” similar to what the Motorola Atrix 4G attempted to be.

But what’s needed is the proper hardware as well as software to make this to work properly. Again, it’s just a matter of time. So in the meantime, most who are not pure Apple enthusiasts are waiting in total anticipation.