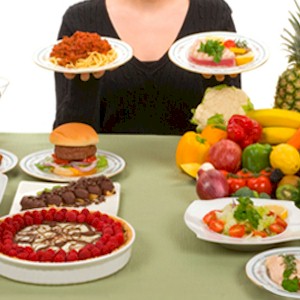 We need to eat food to grow while required to absorb liquid to survive. So ultimately over time, our body will react to what we put into it. Whatever that we eat, we’ll become, which only makes sense.

Our bodies become composed of what we feed it, usually through our mouths, then mix it with a bit of oxygen, while also supplementing ourselves nutrients such as vitamin D which is derived from the sun, which is consumed by the skin.

We also soak in bacteria which can be airborne as it enters us through our nostrils, mouths, and skin. So literally, the outcome of who we are, become, is what we eat and breath.

So this is the big concern why we should be monitoring what we eat, the certain foods that we consume which makes us healthier, smarter, and generally better individuals as a result.

What we’ll become seduced by is how these foods are prepared and then delivered to us. As a result, there are a variety of designer restaurants, different types of specialty cookbooks, and specialized weight loss and diet programs.

How food is now presented becomes reminiscent of how fashion changes in clothing, home furnishings, and even trendy hairstyles. So what you project in what you wear or act, can usually predict what you’re mostly likely going to eat as well.

They Tell You What To Eat
Then the doctors and health practitioners, usually contrary towards themselves, will tell you or offer advice on exactly what to eat, what foods are good for you, and what’s bad.

You know the routine, drinking too much coffee is bad for you because of the caffeine content, but wait, someone else will tell you that coffee is protective and healthy.

If you drink plenty of milk while eating lots of cheese, doing so will strengthen your bones, wait, you should be avoiding all saturated fats, what?

So as a result, everyone is throwing their hands in the air in despair and confusion to what is or isn’t considered a healthy diet. When the health monitoring bodies get into the act, proclaiming these types of recommendations, obesity rates tends to skyrocket.

The biggest issue is that completely healthy nutrition becomes extremely complex, but fortunately, there’s ongoing research and the questions which are now being answered.

The Recent Study On The Mediterranean Diet
For instance, you may of recently heard of the extensive study of the Mediterranean diet. This study was performed in the heart of the region, Spain, and the test involved over 7000 individuals.

The reason most consider this particular study important is because it was classified as an experimental scientific study, with random assignment to the actual diet condition.

So what this means is that those who were eating different diets were roughly, approximately, equivalent at the start of the study, so that any of the effects which resulted, could then be reasonably attributed towards the diet itself.

The study was extensive and long term for a period of around five years. All of the study participants were 55 or older, this so that actual disease development as well as premature mortality rates could be tracked once these people began to age and also be studied.

What The Mediterranean Diet Is
The Mediterranean diet actually shouldn’t be classified as a diet, but more of a lifestyle choice. It involves consuming high amounts of fruits and vegetable, nuts, fish and seafood, wine, and olive oil.

Not surprisingly, these are the foods which are most commonly found in the Mediterranean Sea region of Europe, countries such as Spain and Greece, thus the name.

This diet consists of relatively low amounts of beef and dairy products, little consumption of soda, pastries, candy, and processed meats, but more of grapes, and salads, and not burgers, hotdogs, french fries, or chocolate bars.

Does The Mediterranean Diet Work
So what was found was that the diet actually did make a difference and why wouldn’t it. Although the details may be a bit complex, the interpretation is that there’s good evidence that anyone living this diet will benefit from it.

The long term results proved that the Mediterranean diet can possibly make you healthier and also in a relatively short period of time. It only makes sense eating these natural healthy foods would be better than munching on potato chips, or having a bacon cheeseburger with a soda.

So although this isn’t that shocking, this study is considered to be one the first which provides convincing evidence that by deciding what you eat, you can alter the state of your health.

So The Recommendation Is
So for those who have participated in the study and those who monitored it, they all recommended that you actively eat more fish, drink more wine, eat a lot more fresh fruits and vegetables, which isn’t a new revelation.

So even if the various component foods weren’t separated, the end results were consistent enough with the other studies which suggested that it’s healthier to eat more plant based and unprocessed foods.

Foods such as vegetables, nuts, fish, seafood and poultry for protein, but it’s unhealthy to eat baked goods such as pastries, or processed meats containing preservatives, and avoid drinking soda. Anything that comes in a can, plastic, frozen, or in a box.

The biggest reveal of this study is that extra virgin olive oil (EVOO) is healthy, even though it contains almost 100% percent fat. So drizzle and consume as frequently as possible.

Choose A Eating Lifestyle Instead Of Dieting
There is evidence that the Mediterranean diet is one that works. Those who comply to this diet will see benefits over time since it’s more of a lifestyle.

Adopting a healthy way of living such as the Mediterranean Diet when combined with other healthy choices, the chances of it providing a meaningful impact on your health along with longevity, can dramatically increase.