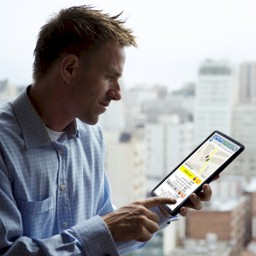 When picking out the ideal Mobile Device for your business, either a smartphone or a tablet PC, your choice shouldn’t necessarily be focused on the operating platform alone, such as the Android OS, Windows, or Apple iOS.

What you also need to consider is the physical size of the device itself, such as a larger screen 10 inch tablet, a smaller 7 inch screen, a sleek shiny ultrabook, a netbook with a large hard drive, a smartphone, or a hybrid smartphone tablet.

The decision depends largely on how active and what you’re business is planing to use it for. So it’s more about the functionality and the features that you need to consider, along with the cost, and where you plan to use it the most.

Mobile Battery Life
Poor battery life on any mobile device is still the biggest issue and downfall, which hasn’t improved or been resolved in favor of a longer battery life.

What consumes the most power on these portable batteries are the larger touch screen tablet PCs. Imagine if the battery in your car had to be recharged several times a week, that would become annoying.

There was a recent survey on mobile device usage which showed a steep decline in mobile Internet usage during the mid afternoon hours every day. The reason for this is because that’s approximately when the batteries of these smartphones and tablets begin running low of their charge, and as a result, they get turned off.

So if you don’t have any means of recharging your battery, you’ll need to consider alternate options, such as a spare battery before you buy your device. For instance, be aware that you’re not able to swap batteries on any of the Apple devices, such as the iPad, iPhone, or the Macbook Air.

You are however able to swap batteries on some of the Windows and Android driven devices, depending on the manufacturer. This also includes the majority of the netbooks and notebook PCs as well.

The majority of these mobile devices, for reasons unknown, also usually come equipped with low-capacity batteries. So you may want to find a battery with a higher charge life, as there are 3rd party “extended” life batteries which are available for certain models.

You may also need an external charger to recharge your battery, which are generally pretty affordable. There are other accessories that you should consider, such as car chargers when your on the road.

Audio Video Image Capabilities On Your Device
If you’re planning to use your mobile device for creating multimedia, and not just to watch them, then you’ll need to consider the quality of the built-in digital camera and the microphone on the device.

It’s not a matter of just choosing the highest megapixel camera. It’s more about the quality of the camera optics as well as the image processing features.

What also needs to be considered is how easy that you’re able to physically handle the mobile device when it comes to shooting and recording a video. For instance, the majority of tablets are equipped with a rear camera which will shoot videos, as well as take photos, but they can be bulky to maneuver.

So this is fine if you’re planning to prop the tablet and take stationary shots, or for video chatting, but if you’re wanting to capture live action, smartphones, because of their smaller size, are generally a lot easier to use.

A device which is able to shoot high-quality photos will also most likely be able to produce high quality video as well. What you also need to consider is whether you’re wanting to shoot high definition (HD) photos and videos. If you are, you should consider getting a separate digital camera in addition to your smartphone.

One of the elements of producing good videos is good quality audio. So since the majority of the built-in microphones on most of these mobile devices are of poor quality, it’s recommended you consider a separate plug-in microphone.

Lavalier microphones, for instance, which can be easily clipped on to a shirt lapel, are extremely affordable. For Apple devices, you’ll also need an adapter as well, which is an additional charge.

Typing On Your Mobile Device
If your required to type anything longer than a quick text, a short email, or a search request on the Internet, typing on a smartphone can be extremely slow, and prone to “big thumb” syndrome errors. That’s when an external physical keyboard can become useful.

So if you happen to do a lot of typing while on the road, a netbook or an Ultrabook with a built in full blown keyboard, or an external keyboard which connects to your tablet via USB or Bluetooth, is recommended.

Before purchasing an external keyboard, however, you’ll need to consider its compatibility as well as how you would carry it around with you. The most convenient portable keyboards are able to collapse or compactly roll up to fit inside your pocket.

Screen Displays Poor In Daylight
The majority of mobile devices, smartphones, tablets, and laptops have screens which are extremely difficult to view in outdoor daylight. Even once it’s turned up to its full brightness, which also drains the battery quicker, the visibility can be poor.

Know that the “Retina display” which are now available on the newest of the Apple devices, they display remarkably well when in full daylight. So it’s only a matter of time until the other hardware manufacturers will be offering similar visible friendly displays, if they haven’t already.

How Much Portability Do You Really Need
When you’re out on the road, are you accustomed to carrying a briefcase, handbag, or a computer bag. If you’re not, and you’d rather not begin, then a smartphone which can easily slip into your pocket is what you need.

The majority of the smartphone screens, and the slightly larger hybrids, are approximately 4.5 inches to 5.5 inches. They also offer all of the same capabilities of a larger tablet, with the benefit of it still being a phone.

What Your Body Language Reveals About Your Self Confidence