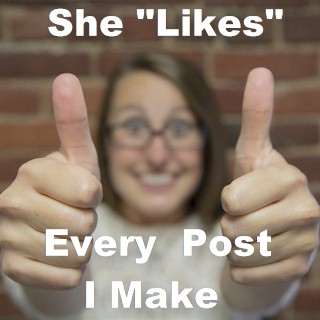 Self-esteem has now gone digital. Many will post what they think is a brilliant image, update, video, selfie, or a “share,” then hold their breath in anticipation, hoping that someone “likes” their post. Then they feel empowered by it. They feel that they’re hip, that they’re relevant, funny and interesting, and not a boring aloof dunce.

Then there’s the feeling of dejection, failure, if they don’t get a single like. What’s wrong with me? The proper response, should be that you don’t care what anyone thinks, this on how others respond to all of your social media activity. How you react to this feedback, reveals all.

Getting some type of a response from FB “friends, is the main purpose and motivator why some will scour the Internet for hours, just to post and get those likes. Praying that just even a single like will do, this to fortify their ego.

What’s known however is that “likes” are given out arbitrarily. This depending on how cool you are, how pretty you are, if you like them or not, if you like their profile pic. To generate likes and comments, is the reason why most will post content on their timelines.

Life In The Digital Box
Really? Has our life been reduced to this. Something as easy and irrelevant as a Facebook like makes people feel better? What getting a like, means that others are invested in them enough, their relationship, this to the point that a click on the like icon is rewarded.

These displays are especially important, if it comes from people they know, such as that hot girl from school. There’s intense satisfaction for those who receives a lot likes, feedback, or birthday wishes. What’s important, is the quantity and the quality of the responses.

Reacting To Social Media Feedback
Those with low self-esteem, will take the negative comments of others to heart, especially if they know them personally. They’ll become disgruntled, once they find that the Facebook post they’ve made, receives no likes.

It’s come to the point, where Facebook is a place where they find support, as they’re social livelihood hinges on it. They’re actually mentally affected, if they get less positive feedback than their more attractive or popular friends.

Those with low self-esteem are far more susceptible, when it comes to social media feedback. If they happen to get positive results their mood elevates, and if they don’t, they feel sad.

Sense Of Purpose
It’s found that self-esteem is just a barometer, which determines ones emotional response to social media feedback. The relationship between self-esteem and Facebook “likes,” also hinges on another factor, which is having a sense of purpose.

Self-esteem is considered how stable a personality is, which can easily be influenced by the events of their livelihood, which in this case is social media feedback.

Self-esteem can be improved by one having a strong sense of purpose, such as the things that they do which are worthwhile, or having valid reasons for living the life they do.

It’s found that those who’s got plenty of purpose in their life, are not affected from poor Facebook feedback, while those who has little life purpose, the more negative Facebook feedback they receive, the worse they feel.

“Likes” Self Esteem And Purpose
What’s found is that how many “likes” someone gets on their Facebook posts, and how it affects their self-esteem, depends on the degree of focus that they have on their life.

What’s known for certain, is that receiving large number of likes, actually improved self-esteem for those who had little or no life direction. It didn’t have any affect whatsoever, for those who had a high sense of purpose.

What the approval of others, whether it’s positive or negative, does is feeds that low sense of purpose. What’s known in this digital world, is that something as insignificant as getting “likes,” now influences ones well being.

The Affect Of Social Media
What this does, is displays the role that social media has on those who are lonely, or the vulnerable such as teenagers, who are still searching for what’s right or wrong, if they’re liked, disliked, or accepted by others.

Going online on social media, where there’s peer-to-peer connection, is one of the most important activities that most teens do, this more than adults.

What’s known, is that 92% percent of young adults go online on a daily basis, usually on social media, most admitting that they do so on a constant basis.

This is where they search for, and find their sense of identity and purpose, which is an extremely important part of their adolescent development.

Since most young people are still searching for their individuality, what they’re especially sensitive and vulnerable to, is taking every negative social media feedback that they receive personally, as their life depends on the approval of others.

Social Media Fills That Cavity
What the Internet and it’s evil stepchild social media has done, is exposed and exploited every crack and crevice of our personalities, our emotions, and how or what we should think or feel.

What’s known is that the feedback we receive on social media, makes us feel supported, gives us confidence on who we are. What a mindless meaningless click of a mouse now has, is extreme influence on our livelihood and how we behave.

Not everyone however, is influenced by this feedback on social media. What it depends on, is our level of self-esteem that we have, our sense of purpose in our lives.

What our level of self-esteem does, is determines how the influences of social media affects our livelihood. Sticks and stones will break my bones, but “feedback” “likes” “comments” will never hurt me.

The Universal Laws Of Attracting More Abundance And Prosperity