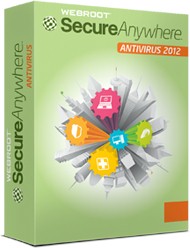 So how can Webroot SecureAnywhere being such a tiny software application be so effective while other comparable Antivirus programs which are on the market can take anywhere up to one Gigabyte of disk space.

First off, the handling and elimination of all the malware and adware etc. that’s on your computer is completely eradicated by using a remote cloud-based process. So as a result, this program uses just the smallest amount of space on your local system while effectively removing the most virulent of all online threats.

Also, the product coding of the program itself is written as stringent and economically as possible, yet still employing the best secure and effective coding practices which is available anywhere.

Webroot SecureAnywhere Antivirus Offers Advanced Threat Protection
• It’s capable of blocking all new and existing Trojans, viruses, rootkits, spyware, as well as all other malware threats which is new and released daily
• The program offers the lightest and the most compact as well as the fastest protection scans for your entire PC system, usually working in approximately two minutes or less
• It’s capable of stopping or blocking all unknown threats which are tracked and based strictly on suspicious behavior
• It continually updates its library of all new threats so it’s always up to date automatically, so you don’t have to download them yourself
• The program prevents any malicious programs on your computer from potentially changing your security settings
• It will run the scans automatically, or you can schedule them to run whenever you want it to

Webroot SecureAnywhere Installation Process
You can imagine just how quick and easy installing this compact little program is, as it takes just mere seconds. All that’s required is you entering your registration code, clicking on the “Agree and Install” tab and within seconds, the program is fully installed and will instantly begin running a self scan on your computer.

The initial scanning protocol on your system should take anywhere from five to fifteen minutes, this depending on how bad your computer may be infected, how big your hard drive is, or how frequently you use it. On a completely new and clean computer system, it will usually finish the scanning process in two minutes or less.

Webroot SecureAnywhere is able to locate and then eliminate a variety of known and widespread viruses which you didn’t even know existed on your PC, or one’s the other programs missed completely. If you happen to begin the sweep process before Webroot’s back-end virus-cleanup server can activate itself, it’s recommended that you wait until it’s ready. This way, Webroot SecureAnywhere will then be able to scan and then clean out the infections.

Running The Full Scans
Once you run all of the full scans, and if you happen to accidentally leave one of them running, it’s possible for Webroot to be able to find yet more traces of infections to remove. This is because of the behavior-based detection system which will catch any new threats immediately. It may need to go back and monitor the others again before it detects and then determines its behavior, which “flags” them as potentially malicious.

Webroot’s detection rate, which is 94% percent of all known threats, is one of the best detection rate scores when compared to the other similar AntiVirus products available on the market, this based on the exact same sample collection. Another program, the Panda Cloud Anti-Virus 1.5 had previously held the detection record at 91% percent.

Webroot SecureAnywhere Testing
Webroot SecureAnywhere when tested also produced the only perfect score when it came to active malware blocking, this better than anything else currently available on the market. Its small local client works together with an active and immense constantly updated online behavioral database which is capable of detecting and then eliminating all previously known and new malware threats.

Based on all the malware removal tests which were conducted, the Webroot SecureAnywhere Antivirus program came in just behind Norton’s AntiVirus 2012 in the results. It was by far way ahead of any and all the other AntiVirus programs available. There is also no other way of referring to other independent lab tests at this time since this particular version of Webroot is still relatively new.

But the initial test scores on the Webroot SecureAnywhere Antivirus has been one of the best at what it does, only comparable to Norton AntiVirus 2012, which is a much bigger program to install.

Learning How To Save Money By Starting A Savings Plan