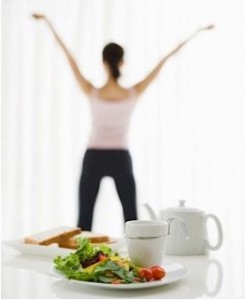 There’s always that one friend you have who can freely eat absolutely anything they want, from grease dripping cheeseburgers to baby back ribs, and not have a care in the world, as they don’t appear to gain a single pound.

But there you are, nibbling away at your carrot sticks or corn on the cob as you carefully gauge your calorie intake, while watching them wolf down the bacon and eggs.

You wonder, how the heck can they do that. What’s their eternal secret to remaining thin while they feast away on fat laden foods whenever they want. They respond by shrugging and saying, “I have a fast burning metabolism.” If that’s it, then there must be some secret force that’s at work, right? The human metabolism system and it’s efficiency is far from a secret. What metabolism refers to is how the energy in your body reacts when it comes to producing and then burning off this energy. It comes down to calories in and calories burnt.

The total daily energy output is how much energy you burn during a 24 hour period, which also includes all of your activities, while you burn off this energy during the day.

The activity level includes structured events such as your fitness workouts, and all of the natural unstructured activities such as walking, talking, or spending time bathing.

How To Boost Your Metabolism Levels Higher

Exercising Is A Good Start
Establishing a regular and routine cardiovascular exercise program helps in keeping your metabolism high throughout the entire day. Cardio exercises such as jogging, walking, biking, etc.

What exercise does is it elevates your metabolism levels, not during the exercising itself but for hours after. So it’s recommended that you do some type of cardiovascular exercise for a minimum of 30 minutes, at least five times a week.

Working Out Your Muscles
What all of your muscles in your body contribute towards is approximately 22% percent to your entire energy expenditure, while fat contributes approximately 6% percent.

So what that means is it’s important that you increase your muscle mass through exercise, which will in turn flush out the fat, even moderately. Doing so will increase your metabolism levels.

According to the latest research, if you increase just 5 pounds of muscle mass anywhere on your body, which is the average amount you would while exercising regularly, what that does is it will increase the resting metabolic rate by approximately 50 calories per day.

Although that may not sound like much, it does add up over time, the same way that adding 50 to a 100 calories per day can add inches around the waist over time. So its recommended that you work to increase your muscle mass at least three times a week.

Getting The Proper Sleep
If your getting just five or so hours of sleep every night, instead of the recommended seven or eight hours, doing so can lead towards an increase in appetite, which results in weight gain, this according to numerous studies.

Eating A Proper Breakfast
There is substantial proof which shows that those who eat a well balanced and hearty breakfast on a daily basis, will eat less food during the day. Breakfast is extremely vital as it helps in jump-starting your metabolism directly after the overnight fasting period.

Avoiding Those Starvation Diets
If you consume too few calories, this in an effort to lose weight as quickly as possible, you’re just defeating the purpose. What the various “starvation” based diets found on the market does is it triggers the body to suppress the metabolic rate by as much as 25% percent.

A better and a perhaps a more effective method is making smaller, more gradual changes to your diet instead of implementing a sudden “all or nothing” type of approach for weight loss.

Eating Smaller Meals
What food experts suggest is eating up to five smaller meals throughout the day, which helps in keeping the metabolism levels up. The key to this is smaller and more frequent meals.

Begin with a wholesome breakfast, a light healthy mid-morning mini meal, a nice lunch, a small mid-afternoon meal, and then a healthy dinner. Make sure that you divide up the calorie intake to fit within your particular goal, and never less than the recommended 1200 calories a day.

Avoid Those “Fat-Burning” Supplements
Generally, all of those metabolism boosting supplements which are available at the health stores are minimally effective, and at times can also be dangerous. So as a result, it’s recommended you avoid them altogether.

What you may never end up is being as thin as you’re wanting to be, or as fit as your food loving friend, but by using these tips, that should help you in increasing your Metabolism levels.