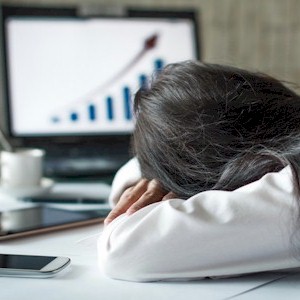 Working too hard, overextending oneself has its consequences, as there are numerous incidences caused by human error, this from a tired overtaxed mind. Some are also wondering what the point of working so hard is, when the consequences of it are evident in the suffering of the aging.

The mind gets overly tired and then begins to burn out, which leads to errors in judgment leading to one becoming overly moody. The symptoms are similar in nature, and can also at times overlap one another.

Burnout is more of a function of work related stress while becoming overly fatigued and expired, while moodiness and making mistakes in judgment are the byproducts of it.

Professionals who are nearing burn out indicate symptoms such as losing focus and attention, while various degrees of the burnout are associated with cognitive failure, such as saying things that they’ll regret later.

This can also include forgetting names, missing dates or important cues, speeding or failing to stop at a stop sign, etc.

Know When You’re Burning Out
What many won’t admit is they may be flirting with burnout. It’s found that women will complain more often about its possibly than men generally will, as men will tend to struggle it out longer. What’s needed is better moderation.

It’s found that some men are reluctant because it’s seen as a sign of weakness, or they’re afraid they’ll let others down. Its found that this attitude needs to change.

The end result and the ripple effect it causes can prove to be profound, so it becomes important to know the warning signs of a burnout, this in others and especially yourself.

Small Details Become Major
This if the occupation is to solve the issues of a client, such as a doctor. One begins to realize that even the smallest of details looms large or compounds. These details then manifests itself, producing emotional responses such as anger.

The mind becomes impatient, irritable, and sensitive, which are all signs that the mind can’t no longer distinguish between what’s a minor issue or a big problem.

Chronic Exhaustion Low Energy
Getting easily exhausted both mentally and physically are strong indicators of burning out. The level of exhaustion is much more elevated than just feeling tired after a long hard day of work.

Instead, this fatigue becomes chronic while you become overwhelmed with the feeling of being maxed out, this even before the workday begins.

Getting Sick More Often
What adrenaline that’s caused by stress can do is burn your fuel for awhile, but once that eventually burns off, what happens is that the mind and body crashes.

The end result being that the immune system begins to break down, making you more susceptible to getting sick easier. This could be constantly catching the common cold or flu, to severe chronic headaches, to heart palpitations.

You Become Cynical
The immense enthusiasm that you once had in your work begins to fade, and now everything and everyone that you encounter begins to rub you the wrong way, becoming abrasive.

You once placed all of your time and effort that was required towards your pending projects, but now you feel like doing just the bare minimum, and don’t care otherwise.

You Become A Perfectionist
It’s known that certain perfectionist tendencies are traits associated with the initial signs of a burnout. The reason being that what perfectionist behavior patterns does is it drains out energy.

Most professions however has minimal room when it comes to making errors, such as surgeons, cost accountants, or air traffic controllers.

So what you need to ask yourself is if the particular task that you’re currently working on, needs precise perfection or not. It’s usually found that it doesn’t.

Experiencing Inefficacy
Inefficacy refers to a feeling that you’re no longer able to produce tangible results in your work or life as you did in the past, becoming less effective.

Once you begin to lose efficacy, what happens is that your confidence begins to plummet, you begin to feel less efficient or important at work, and your self-worth and esteem takes a nosedive.

The Demands Become Too Much
The demands on your time becomes just too overwhelming while the job resources begins to diminish. Your job resources refers to any area of your work which requires sustained effort or concerted energy.

The demands of the job itself usually isn’t the problem and isn’t necessarily that bad, but since they deplete your energy, you need to mitigate their impact with the resources available.

These job resources are those areas of your position that should be motivating to you, while helping you in achieving the goals that you’ve set out for yourself.

Beginning To Feel Disengaged
Gradual burnout is known as a process of you slowly beginning to unplug from all those things that should be giving you energy and enthusiasm at work.

Instead, you become bored, listless, and lack motivation. The opposite of this state of mind is work engagement, a potent blend which includes energy and commitment.

The Need To Recharge
Recovering on a daily basis is an important component when it comes to burnout prevention. But taking it easy, relaxing, has become stigmatized in our rapidly busy 24/7 work culture that we live in.

What’s recommended is to be mindfully recharging your batteries, this by rejuvenating yourself everyday while at work, then doing a macro recharge after work every night, and especially on the weekends or while on vacation.

Feel The Burn
Burnout has been described as one of the biggest occupational hazards of the twenty-first century. Educating busy professionals and workplaces about its warning signals is the initial first step in reducing its impact.

Is The Classic Alpha Male Profile More Successful In Life