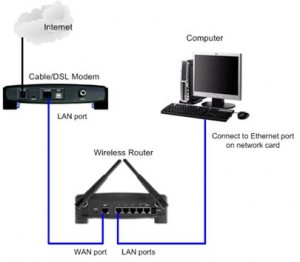 It wasn’t too long ago that the average home network distributed Internet access through cabled Ethernet wire to all of the components on the network. The file distribution and swapping however was extremely slow and often limited between the various connected devices such as the desktop PC, laptops and printers. Now that same cable router or the basic Wi-Fi equipment is no longer able to keep up with all of today’s lightening quick as well as demanding components which are in the household.

802.11n, which is the latest generation Wi-Fi standard, is built to be able to support multiple concurrent PCs, tablet PCs, laptops, smartphones, game consoles, Blu-ray Disc players, and no doubt any other wireless device which may come down the road.

So the best possible way to be able to bring your entire wireless home network up to speed is by using the newest of these Wireless-N routers.

Should You Get One Band Or Two?
All of the Wireless-N routers operates at the 2.4GHz frequency, but some of the routers, which are called N-Plus, are also able to support a dual-band operating mode as well, which allows them to be able to stream data simultaneously on the 2.4GHz band as well as on the 5GHz band, which is less prone to interference.

What this allows is it will dramatically increase the router’s effective bandwidth, so you’ll be able to do a lot more on your home network without needing to worry about any potential traffic induced slowdowns.

Holding On To The Old Router
The new Wireless-N routers run on the same frequency as the older 802.11g and the 802.11b equipment does. As a result, they’re backward compatible with all of the existing wireless devices which utilizes the older specifications.

You won’t however be able to experience the newer Wireless-N routers superior speeds on that aging laptop computer, but connectivity will never be an issue.

Using Wireless-N Adapters
Wireless-N adapters, which are available as either an USB, Ethernet, a PC Card external device, or PCI/PCI-E internal cards, allows you to add wireless capabilities to desktop PCs or laptops which may lack Wireless-N support.

As you might expect, these Wireless-N adapters allows these non-native 802.11n devices to be able to operate at the Wireless-N router’s maximum peak speed.

One instance where you may want to use a Wireless-N adapter is when you’re trying to connect an older laptop to your brand new wireless 802.11n home network.

Although the existing integrated 802.11b/g adapter which is previously built into the laptop will most likely allow you to connect to the network, the new router’s security protocols which are far advanced, will most likely block access.

This option would be better than reducing the security of the network to a “legacy” protocol so that the older devices would be able to interface, or even worse, disable the security of your network altogether. If you use a Wireless-N USB adapter however, you can bring that old laptop up to speed without needing to compromise your network’s security.

No Need To Renovate
One of the best features of creating your own home or small office wireless network is there’s no need for tearing or poking holes into your walls to thread Ethernet cables to connect the PCs, or your other network enabled devices which are in your home.

Unfortunately, the older Wireless N Wi-Fi routers were extremely poor with limited ranges, which resulted in slower connection speeds for all of the devices, which may have been at the fringes of the connected wireless network.

Since the newer generation Wireless-N routers are now able to support ranges of up to 300 feet, there’s no longer a need to worry about your Internet-capable LCD TV which may be downstairs, and connected to a wireless game console. You will also experience no lag in speed whatsoever, as was the case in the past.

Taking Full Advantage Of Media
Wireless-N routers are able to support up to 300Mbps peak throughput, which translated, means that you’ve got adequate bandwidth to support any or all high-quality audio streaming, HD video streaming, and simultaneous browsing on the Internet between multiple computers, and all of your other wireless devices which are online, including gaming.

The Wiring Is Still Important
The majority of the various new Wireless-N routers will also be able to support up to four wired network connections using Ethernet ports. If you’re wanting to get the best possible wired performance, then you should be selecting a 802.11n router which has Gigabit Ethernet ports, that’s able to support a 1000Mbps peak throughput.

Maximum Wireless Security
If you’re currently using Wi-Fi equipment which utilizes WEP or Wired Equivalent Privacy protocol, keep in mind that your network may be vulnerable to attacks or hacking. The newest of the Wireless-N routers supports all of the latest in security protocols, which is able to keep all of your sensitive data safe as well as secure.

Drunk Because Of The Antioxidant Resveratrol In Red Wine