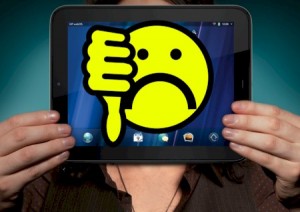 The sudden and surprising demise of HP and their WebOS Touchpad Tablet PC after just seven short weeks on the retail shelves is a reminder of how these tech giants are failing to take a chunk out of Apple’s dominant iPad.

The Touchpad joins the trash heap occupied by Dell’s failed Streak 5 Tablet because of weak sales, and there are suggestions that there may be a few more on the horizon to follow.

All of the Tablets which are not named the iPad just doesn’t sell lick off the retail shelves. That’s the clear obvious message from the recent events over the past few months. There are other major tablets which has failed miserably in the hands of consumer adoption. The list includes various products and manufacturers such as the Eee Pad Transformer and even Motorola’s Xoom.

The Playbook Tablet by RIM which initially received poor scathing reviews and as a result, the sales has been poor. RIM however has no plans of shutting down the Playbook despite it’s lack of popularity, as they view it as their primary platform of their future.

An Apple A Day
All of Apple’s rivals which were lining up hasn’t done that well in designing the software for their tablets, which compounds the problem. Apple led the field of consumer acceptance in this category while Google, as expected, with their Android was their closest competition. This was followed by Microsoft and then RIM.

There are plenty of analysts however which are expecting the tablet and mobile landscape to change sooner rather than later, this based on Google’s recent move to purchase Motorola Mobility.

This can potentially raise the stakes against Apple’s dominance as it gives Google the hardware devices to showcase their software, similar to what Apple is currently doing.

So Going Back To That HP Touchpad Thingy
Great, you’re most likely too late as all of the retailers are probably sold out. You could buy a great looking HP Touchpad Tablet PC for $99 bucks, wow, I’ll take two please. But not so fast bargain bin deal seeker.

Reasons Why The TouchPad Is Toast
What about the updates for the WebOS. Mobile OS updates are extremely important to keeping the mobile devices running as healthy and slick as possible. So owners of the Android or the iPad has nothing to worry about. Regular updates are initiated by their support systems. These updates are essential for the tablet to run new apps as well as even playing advanced levels of games etc.

But HP’s sudden decision to completely abandon ship by ceasing support of the WebOs and the tablet device operations means that there’s absolutely no chance of any future webOS updates. So without HP not bothering to help with the software, how long can this platform last?

HP has however encouraged developers to continue developing apps for the WebOS while there are also vague indications that HP themselves will continue to develop the WebOS, but that’s obviously a gamble. There are also whispers that the Android may eventually get ported over to the WebOs.

WebOS is also a failure when it comes to the availability of applications.

There are now close to 500,000 apps currently available in Apple’s App Store, where 100,000 are specific for the iPad. Android for their tablet’s at last count now offers over 200,000 apps. In comparison, there are a whopping 8000 apps for the WebOS, and some don’t even work on the TouchPad.

Slow As Virtual Molasses
Although the Touchpad is powered by a 1.2GHz Qualcomm processor, most owners has complained how sluggish the TouchPad is, along with frequent crashes. This resulting in constant rebooting of the device.

The TouchPad also has a few software glitches as well. One big complaint is that the e-mail app at times won’t display the content of the message, requiring you to reboot. Also, when you attempt to rotate or spin the screen, it takes close to two seconds for the screen to catch up, which is an eternity in online terms. Some apps also apparently has a hard time loading, some taking forever.

The TouchPad also has a physically poor looking design when compared to the Galaxy Tab or the iPad 2. Apple not only has slick software, but their design team is top notch as well. The combination of these two factors is why Apple and their products are defined as lifestyle products and not fads or gadgets. The success of Apple is because of their ability to combine esthetics and technology.

HP just suddenly deciding to abandon the Tablet business leaves the owners no one to contact for technical support. Although the majority of retailers should offer some type of Touchpad support, this is the true definition of a “fire sale” where there’s no replacements or spare parts available.

The reason for the HP Touchpad Tablet failure is simple, it’s not an iPad. HP has created a branding and marketing disaster because of what they did. Even when HP decided to discount the TouchPad to $100, there really wasn’t a huge stampede of buyers, as they would still most likely buy the iPad for significantly more. This simply because of the brand itself.

Apple Status Quo
Once you buy the Apple iPad, then it becomes a social status item. Apple has set the standard by making it a cult like icon. Apple products are now not only cool to own, but they are just simply superior and a trendsetter which can’t be compared to anything else.

So someone, someday will eventually knock on the door of Apple and threaten the iPad, it’s bound to happen, right? Some developer will construct a better OS than the iOS, but then, most likely, the buyers will still continue to purchase the iPad, just because it’s an Apple product.

So You're Starting A Social Media Campaign For Your Small Business