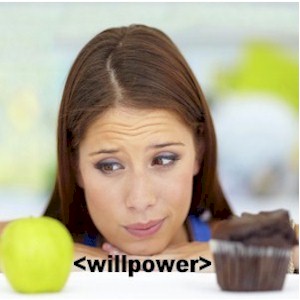 Take one’s fitness habits for instance. It starts out strong at the beginning of the year when resolutions are being met. Fitness centers experience a rush of new memberships. Then predictably as the weeks and months wear on, the crowds taper off. Then soon, there’s no longer a lineup for the treadmill.

The reason being that we think willpower is an “all or nothing” event, and as a result, we don’t become consistent in what it is we’re doing. Any ferocious or sudden explosion of our willpower usually isn’t sustainable.

Poor Self Control
We’ll begin our day with extensive energy reserves and focus, but as the day wears on, that energy begins to deplete, as does our self-control. We’re then more likely to lose our focus or cheat ourselves later on.

Just because our willpower may feel indomitable before noon, it doesn’t mean that it will carry. So make sure that you regulate your energy reserves, and never overestimate your resolve later in the day.

Programmed Thoughts Halts Progress
So why is it that seemingly strong motivated people fail, this despite all their bravado. The reason it appears is because of the “enemy” that’s within us, which can take us down.

The unconscious mind percolates and spits out programmed thoughts during the day. We have no idea where these thoughts come from, but they’re usually negative and self defeating in nature.

The more that these thoughts become perception, the more that they’ll define our actions. We are all creatures of habit when it comes to our thoughts and actions, which slows our willpower.

Our Introspection
So what you’re wanting is to take more control of your unconscious mind, that immense mysterious processing system that’s still relatively unknown. We attempt to use our willpower to bypass these obstacles.

Introspection works when we’re preparing ourselves to go from Point A to Point B, but nothing can surpass hard work until we succeed. What’s more alarming is how much of it we can’t control.

It Looked Good On Paper
Some claim that you should plan out your work on a daily basis, then stick to that plan. Others may contradict by saying that everyone has a plan, this until obstacles alter it.

Just because a plan looks perfect doesn’t mean that it’ll work out. All it means is that you’ve determined a plan of attack that you think will work.

What our brains want is stability and certainty, so a plan that doesn’t work out becomes uncomfortable to accept. What you can’t do is will a plan to work. All you can do is exercise willpower to adjust and tweak as needed.

The Consequences Of Quitting
Whenever we quit doing something for the first time, it’s difficult, no one wants to give up. The second time you quit, it gets easier. Then the third time, you don’t even bother thinking about it.

The reason for this is because we adapt to the sensation of quitting, similar to we adopting anything else. The more that we adapt, we experience less of the sensation.

Whatever external consequences we face because of the quitting, the one that will sting the most is feeling that sensation internally. For willpower to work, it becomes important that quitting doesn’t lose its sting.

Lack Of Feedback Develops Apathy
We all appreciate a pat on the back. The reason why we tell others we trust what we’re doing, is because we get back immediate feedback, this especially if we seek it out.

If you do so unwisely, get feedback from the wrong people, then what you begin to lose is perspective, accountability, and begin developing apathy on why you’re even trying.

What research also shows is that it’s more helpful to seek feedback quickly, this because any delay will undermine your performance. So get it as fast as possible and take it straight.

Rumination Becomes Wasted Energy
Willpower that goes against rumination doesn’t work, it doesn’t stand a chance. What we do is over think and then begin to drift into endless rumination, this about all the bad things that could potentially happen to us, which depletes our willpower.

Our brains are extremely sensitive to threat, which is a good thing to keep us safe, but the more that we ruminate about failure, what we’re doing is burning our valuable energy addressing that threat instead of overcoming it. We then lose our edge and suddenly it’s gone.

No Technique All Willpower
Even what the most resolved person who has the most willpower needs is practice, a tested plan of attack, a method of accomplishing or overcoming something to achieve success.

It’s not possible for anyone to use willpower alone to accomplishing something without acknowledging what the best proven practices are, which directs their efforts.

For instance, if you’re wanting to lose weight, get in better shape and sustain it, what you need is practice and experience to get there. Willpower will give you the motivation, but you can’t do so without practicing.

To Believe
The brain uses more energy than any other organ in the body. If you believe that you can do something or not, your brain still uses the same amount of energy. If you don’t believe you can’t do something, then you won’t.

You need to believe that you can do something although there’s no guarantee. Belief is a prerequisite for achievement, and not an exhaustive one. So just believe that whatever you’re doing will work, and is worthwhile.

Best Methods To Harness Energy And Efficiently Generate It