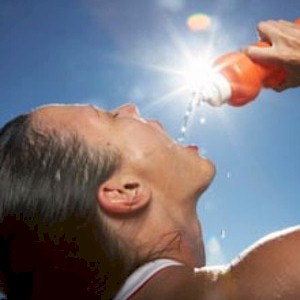 It’s known that any type of physical activity, this from cleaning the house, taking a walk, to jogging or golfing, anything that raises the heart rate and activates body movement, are all beneficial to getting healthier. So exertion of any type is recommended.

What’s also been known is that it’s intense activity which is the most beneficial. The type that exercises the body to the point of profusely sweating, pushing the body to its limits, is the most ideal way for it to positively react to rejuvenate itself.

Instead of the more sedentary type of activities which are moderate, such as vacuuming or swimming, those who engaged in more intense activity like running or aerobics, displayed close to a 15% percent lower risk of illness.

The Advantage Of Intensity
It’s found that the benefits of vigorous activity and sweating applied to both men and women, and for all age groups. The results indicated that regardless if one is obese or unfit, or may have diabetes or heart disease, the results were similar.

So if you’re able to work yourself up to perform any type of vigorous activity which races your pulse, doing so offers significant benefits when it comes to longevity.

While these findings may be intriguing for some, for others, it’s not exactly ground breaking news. Research has shown for decades that higher intensity exercise offers greater health benefits.

So when performing vigorous intensity exercise, bringing yourself up to a healthy sweat, has shown to increase aerobic fitness levels more effectively than just doing anything moderate.

Taxing out the body as hard as possible appears to provide the greatest cardio protective benefits than any other type of exercising. So if you think that just walking around the block is enough to remain fit, it usually isn’t.

Moderation Also Recommended
This isn’t saying that moderately intense activity isn’t effective and thus pointless. The more that you move your body around during the day, such as walking, climbing, or bending, the better.

Research has proven that performing moderate exercise also has its benefits, such as lowering the risk of certain diseases such as Type 2 diabetes. The key message being that you want to be in motion at all times.

So perform moderate movement whenever possible. Then several times a week, perform high intensive exercises, making sure that you push yourself to the limit, this by getting your heart pumping while breaking into an intense sweat.

It’s found that this sweating period doesn’t need to be for long, and it doesn’t have to be on a daily basis. In fact, what’s found is that overdoing intense exercises can at times backfire, as it only takes small doses of high intensity activity to reap the benefits.

The Need To Sweat
The benefits that a good sweat can provide are well documented. What regular physical activity which induces sweating can do is lower blood pressure and cholesterol levels.

What sweating does is it helps you reach and maintain your ideal healthy body weight, while reducing the risk of immune disease, moodiness, and cardiovascular incidences such as stroke.

While the control of one’s blood sugar resulting in weight loss is the main benefit of sweating, there are other advantages that most may not be aware of.

Whenever you move your body, this to the extent of sweating, what your muscles releases are the hormones testosterone, peptide YY, and irisin.

What your body then naturally begins to do is crave for sweat as it reduces stress, forcing you to get active and workout.

What’s Moderate Intensity What’s Vigorous Intensity
The easiest way to know your intensity level is by taking the “talk test.” If you’re able to sing while you’re exercising, then that’s considered light intensity.

If you’re able to have a regular conversation and talk but not sing, that’s considered moderate. When it comes to vigorous intensity, you shouldn’t be able to talk normally, as you’ll need to gasp for breath just after a few words.

Don’t Sweat The Small Stuff
For many, it may of been awhile since the last time they’ve had a good sweat. The reason being that the sensation can be uncomfortable for them, or considered too difficult of an effort to do consistently.

So if you consider yourself out of shape, too old or too flabby, you should begin a long-term exercise program starting today, this to routinely break into a healthy sweat.

The best way it’s found is developing a habit of performing intense activity to elevate the heart rate, such as rapid walking, jogging at around 6 to 8 mph, or competitive running.

What’s also found effective is playing movement sports such as tennis, or cycling steep hills. The idea being to lose as much sweat as possible, and then replenishing it with clean crisp water.