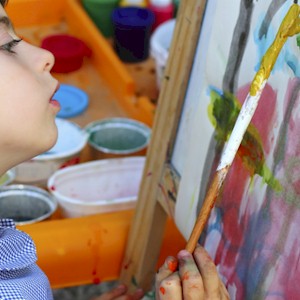 In the opinion of most child education experts, creativity is considered the real genius. It’s generally known that children who are born intelligent will learn the quickest, and incorporate the knowledge faster into their everyday life situations.

But when it comes to inventing something new or creating something that’s completely original, this is what’s considered real genius. Most will admire true originality, whether it’s an original piece of abstract artwork, a new story, or some type of invention which can make life easier for others.

So for parents, how can you teach your children to develop the process of better creative thinking. What lessons can you instill in them, to follow the process which is known as thinking from “outside the box” at an early age.

There are a few clinically proven fun and easy exercises for various activities which can contribute towards they developing this extremely valuable skill set which is creative thinking, and then allow your child to develop it. Slight alterations should be used based on your child’s age, skill and personality.

Ways Of Instilling Creativity In Children
• The Storyteller – One begins by telling a story and then stops after creating a few sentences, then the next child in the group continues the same story. There’s no limit to the number of participants. It’s recommended that the story be recorded so that it can be reviewed by the participants later, more for entertainment purposes. What this activity does is it forces the child to think creatively.

• Storytelling With Pictures – Images can be taken from a books, magazines, newspapers, or off the Internet. Place the pictures next to each other, and then allow your child to tell a story by they looking at those pictures.

Take turns between your child and yourself, developing stories based on the images. This can have several variations such as placing the pictures face down, and then turn them over one by one continuing the same story.

Then gradually begin to increase the speed of turning the pictures over, so that the story telling needs to become faster. Once you’re done with a set of pictures, then change the order and see if they could come up with a different story based on the new order.

• Words On Cards – Begin by preparing a series of words which are written on cards. Then begin telling a story based on just using the single words. You can also use the same variations as described above with the images.

• Playing Classical Music – Ask your child what type of mood that a particular piece of classical music creates in them, what kind of story the music tells them. You can also play a piece of music and then have your child paint a picture which shows their particular mood.

Always Be Asking
Whenever you’re reading a book to your child, always ask them open ended questions which are thought provoking in nature such as: Would you handle this situation differently? What else could the main character do differently? How and what do you think the character felt?

• Role Playing Games – Try playing “pretend” games with your child as often as possible, role play with your child whenever you read a story to them, ask them to act out the role of their favorite character in the story.

• When Children Socialize – Whenever your child has friends over to visit, have them come up with some sort of a short play and them ask them to perform it for you. This is usually always a fun activity for the children to do, while keeping them busy and entertained.

• The Worth Of A Picture – Encourage your children to paint their own version of an object. Have them paint it in different colors, for instance, ask them to draw or paint a series of their favorite fruits that they like, and then ask them to change the colors on all of them.

• Days Of The Week – Choose a specific day a week and then have the entire family members do all of their routine activities in a different way then they usually would. For instance, have them brush their teeth using the other hand, find a different route to school, sing everything instead of just talking, wake up earlier and then play a new game, walk backwards on occasion, etc.

Never Discourage
Don’t ever discourage your child from they using their imagination and being creative. If your child happens to tell an imaginary story within reason, always praise them while also acknowledging the creativity.

If your child happens to come up with an original or unique answer to a particular question, even if the answer happens to be incorrect, then make sure that you acknowledge their creative thinking first before correcting them.

Make sure that you keep your eyes open for any type, any signs of creativity as well as originality which they display to you. Always be praising and encouraging them at all times on these traits. Make it fun and enjoyable for them, this for the sake and the development of your child’s creativity and stemming genius!