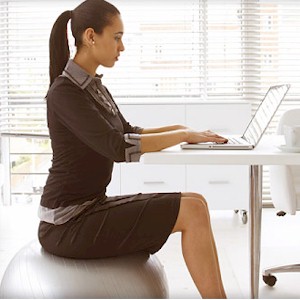 In today’s society, sitting down is a common act, especially when our jobs dictates us to do so, as it appears to rest our backs from strain, while taking a burden off our feet. The sitting position is also the most comfortable when eating or watching television.

But although sitting down feels like the best and most natural thing to do, it’s found that doing so for extended periods of time is proving to be bad for us. This seemingly comfortable act, especially if sitting for the entire day, places too much strain on our body.

What research has found, this based on the physiology of the body, is that sitting for too long can have long-term health effects, this beginning from the brain right down to the feet.

It’s found that there are a variety of maladies which can result from a constant and habitual sedentary prone position, this according to expert clinical research.

How It Affects The Brain
What’s found when sitting for extended periods, for instance working at a desk under stressful conditions with no breaks, does is it decreases the functionality of our brains, as it weakens the vascular network.

This fogginess of the brain is because of a decrease of blood and oxygen flowing to the brain. Whenever we’re active and moving around, what the blood oxygen mixture does is it works harder to pump itself to the brain, fighting gravity.

This action stimulates the discharge of mood-enhancing chemicals along with various protective genes, which is known as BDNF or brain derived neurotrophic factor.

Activity promotes the growth of these brain neurons while protecting it from damage such as stress, trauma, and environmental toxins. When we’re sitting prone, this action becomes restricted, the chemical release slows down, the brain becomes confused, losing focus.

The Spine Shoulders And Neck Gets Out Of Alignment
Observe how others around you sit prone in their chairs and then envision yourself doing the same. You most likely sit a little slouched over with your head and neck protruding forward, this instead of aligning with the spine.

Everything goes out of proportion as the shoulders and back slump forward into a humped back position, rounded at the upper trapezius, this when arching forward from the lower back.

There’s improper alignment of the neck vertebrae, the shoulders and the spine, this when sitting for hours at a time without getting up, which can lead to permanent muscle and bone damage, along with repetitive stress injury.

Lower Back Can Become Herniated
Mom and our teachers at school constantly told us to “sit up straight.” This tough love was in the attempts to prevent us from potential back issues, as what’s needed is regular movement in this area.

What physical movement promotes is blood and nutrients to flow into the spongy soft discs which are between the vertebrae. What sitting for long periods of time does is it distorts this misalignment of the discs, and as a result, hard collagen begins to form between the tendons and the ligaments.

If you’re stationed at a desk all day, attempt to sit up straighter without slouching forward, meaning your neck shouldn’t be extending past your shoulders.

Your shoulders also needs to be relaxed, the arms at 90-degrees at the side, and the feet planted flat on the floor. The lower lumbar region of the back should be supported by some type of back support to prevent tightness, which can cause herniated lumbar disc damage.

Damages The Organs
A host of organ issues such as fatty liver and cardiovascular diseases are activated from those who spend the majority of their time sitting prone, this even if you exercise regularly.

Even if you’re active outside of work, it’s important that you stand up from your sitting position and move around during the day. What compounds this is eating lunch at your desk, or eating artery clogging fast foods when busy.

Chronic Diseases
What physical inactivity in the sitting position does is it can cause several chronic diseases such as diabetes, colon and endometrial risk, obesity, and fatty liver disease.

The reason being that what regular movement activates is the production of protective antioxidants, while what being stationary does is it leaves the cells vulnerable to these major illnesses.

It’s also confirmed that there’s a drastic decline in insulin response, this from just a single day of prolonged sitting, exposing one to a higher risk of Type 2 diabetes.

Muscular Degeneration
What’s known is that muscle degeneration develops once you stop using your body less, including not sitting up straight or exercising. What sitting and slumping in a chair does is it weakens the neck, shoulders, spine, and abdominal muscles.

What unused muscles can do is turn soft. What a slouched forward lumbar, poor abs, tight hip flexors does is it forces the spine to cave outwards, resulting in an arch, which limits range of motion in the back and hips.

Disabilities From Sitting For Too Long
It’s found for those who are stationed to a desk for at least 8 hours every day working, this over one’s vocational lifetime, increases the risk of various types of physical disability, this especially once growing older.

What’s known is that for those who are accustomed to habitually sitting and watching TV, or sitting at their computer desk, accelerates their mortality by close to 30% percent, this when compared to those limiting themselves to sitting one hour a day.

The Clinical Theories On The Methods To Achieving Success