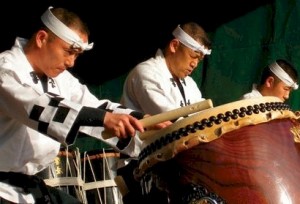 Depending on where or what your culture is, the thundering beat of a drum usually signifies as well as evokes different and powerful memories. For many, it may mean your favorite rock band, to others it symbolizes a new harvest season, or a parade marching down the street. The constant deep “thump” beating of a drum is now also a convenient as well as an exhilarating workout method as well.

For thousands of years, the constant deep tone beating of a large drum, which is known as Taiko, has been used for spiritual practices, originated in Japan. The huge hollow bowls, made strictly from wood, the taiko was used as a warning system for villagers about upcoming storms, or to send specific messages to warriors on the battlefield. The taiko drumming was also used as a ceremonial method of promoting a plentiful harvest season.

The loud thundering banging of the mallet directly hitting the skin of the drum had the strength to physically awaken people, emotionally as well as spiritually. Because of the taikos’ spiritual connection, the Japanese culture originally insisted that the beating of drums should only be performed by holy people.

Taiko Is Banging Out A New Beat
During the 1950s, taiko drumming evolved from the ceremonial rituals of centuries past, towards more orchestrated festival performances. The rhythmic pounding along with its group ensembles and their collection of drums of various sizes and shapes, provided for different sounds which were used in concert like settings.

Modern day taiko drumming performances now occur in events as well as festivals both as private and public performances. Audiences from around the world are absolutely enthralled by the loud majestic rhythm which is delivered by an unison combination of the powerful bangs and bongs of the drums with orchestrated movements, drama, diverse drumming techniques and martial arts.

Watching the taiko drumming experts in action can at times become overwhelming. The simplistic up and down striking movements along with the obvious fitness and the health benefits has now evolved taiko beyond just performing, but also towards the world of fitness and participation.

Taiko Drumming Fitness Benefits
Taiko drumming as a fitness workout can be used to relieve stress along with also being an excellent method of achieving a full-body cardio workout. There are now even fitness centers which are setting aside the step classes and replacing them with taiko drums and mallets.

One advantage of taiko fitness classes is that there’s participation from both men and women of all fitness levels and ages. You’re able to set your own pace as well as how you decide to involve your body in the movements, whatever feels comfortable.

Since taiko drumming involves a variety of movements, different steps and jumps, it becomes a performing art. The same movements from centuries ago are now being implemented into the modern day taiko aerobic fitness movements.

Actively performing the taiko drumming workout anywhere from 30 to 60 minutes greatly benefits the cardiovascular system along with strengthening and toning up the core, arms and legs, the back and the shoulders and the triceps.

The taiko drumming classes are generally performed in a standing position, so developing strong glutes and legs helps in the flow of the workout. Just the simple movement of contracting the abdominal core muscles with every strike of the mallet is one of the best methods to improve that area for strength.

Also, lying on the floor and then hitting the drum while it’s positioned firmly between your knees is another method used to specifically targeting the core stomach muscles as well.

If you’re generally new to working out and exercising, taiko drumming will feel a lot more effective once you’ve establish and then develop the coordination which is needed for the movements.

Being consistent with the program is the best way of improving the coordination of movements and experiencing the flow of energy, as well as improving the strength which is created as you pound away at the drums.

As with any type of exercise program, the workout will usually begin with a slow steady cadence to warm up the muscles, while the intensity gradually builds as time progresses. As the class begins to wind down, proper stretching techniques on the exhausted muscles helps in relaxing the body.

Initially, just standing there and then beating a big drum may strike you as a bit boring, headache inducing, annoying and loud. However, once you’re participating and performing in a group setting, with uniform movements such as leg lifts, v-steps and squats, beating the taiko drum becomes rhythmical as well as social.

With taiko drumming as a fitness method, you can now pound out your frustrations and stress away, but you’re also improving your health while creating group music with like minded drummers.