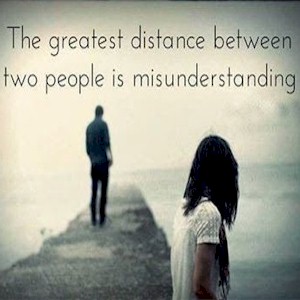 What we do is put ourselves through unnecessary turmoil, this by placing unrealistic expectations on others. Although what we all deserve is basic word when it comes to relationships, such as mutual respect, but counting on anyone can lead to disappointment.

Keep in mind that everyone is at a completely different mental state in their life journey than you are, and what they say and do will confirm that. Everyone right now is currently working through a problem that you know nothing about, so lend them sympathy.

So they can’t help you, let alone you helping them. To develop more successful happier open relationships with others, it becomes important not to expect anything from them. They’re living in their own world, and you are only a fragment of it.

Never Expect Anyone To Do Anything
The ethics of others always differ from yours, this based on numerous factors, such as their upbringing, spiritual beliefs, culture, religion, etc.

For instance, because of your upbringing, you rarely swear, but a coworker of yours was raised by a boatload of sailors, so they swear profusely. Does that make the person wrong.

To some it does matter, but expecting them to change because of you, you’ll just become disappointed, this because what’s right or wrong isn’t defined.

So just focus on sticking to your own moral standards, and allow others to live their life as they choose, this provided it doesn’t physically harm you or those you care about.

Realize No One’s Perfect
You’ll never be disappointed once you think that being imperfect is perfect. What most will do is give others a hard time whenever they screw up, making them feel like a failure, placing strain on the relationship.

What everyone should be discouraged from is becoming perfectionists, this because obsessive compulsive behavior to have everything perfect, leads to anxiety, chronic disease, and intense moodiness.

So allow for mistakes, and then make sure that you learn from them. Think how boring life would be if no one ever made blunders. We’d be living a world full of cold autonomic pedestrians.

You Always Won’t Agree
You’ll rarely agree with what each other says, even those whom you’re the closest to. So there’s no point getting upset once someone challenges you, or if you have a contrary opinion.

The world would be a mundane existence if everyone agrees with everything you say or did, as it’s our unique beliefs and perspectives which allows the human race to evolve and prosper.

Think what would happen if we all agreed with every decision that was made regarding how we should live our lives, that we dared to challenge the mainstream.

No One Knows What You’re Thinking
While some have intuition that’s more finely tuned, most just have a distorted sense of what other people are thinking.

Just because you may be more sensitive, doesn’t make you psychic and put you on the same telepathic wave length with others.

Not everyone wants or cares to know what you think, let alone predict it, so don’t expect them to. Just learn to communicate better and be more transparent and honest.

Catch Yourself When You Fall
Good friends along with a stable family will help you in times of need, but don’t always count on them to pick you up every time you fall or fail.

They’re living through their own internal struggles, difficulties, and you can’t expect them to carry the weight of yours and their problems at the same time.

So understand that they may not want to help you right now. If they’re not there, that doesn’t mean they’ve abandoned you, it means that you need to fight your own battles sometimes.

Then once someone says that they don’t have a clue what you’re doing, that they just don’t “get” you, then who cares.

They Treat You Indifferently
Not everyone is going to treat you with respect. We don’t live in a perfectly aligned world. Until everyone gets on the same wavelength consciously, some will treat you poorly.

So view their behavior from a compassionate viewpoint, as it’s never about you, but more about how miserable their current life is, their demons, so just treat them as kindly as possible.

People Change And Move On
People are constantly changing based on their circumstances and experiences. On a particular day, they may be battling the greatest struggle of their life.

This is what’s dominating their life and it’s not about you, so keep this in mind whenever they may snap back at you, so never judge them.

Love everyone regardless of what or who they’ve become, even if you don’t recognize them any longer, or they don’t match your ideals.

Stop Expecting Others To Be Perfect
Life is unpredictable, so some will take longer to reach a level of consciousness, getting their stuff together, so show empathy as they’re doing the best they can.

Just bring more value to the world, your contribution to all your relationships, and never try to control or criticize others on how they handle their lives.

Never Expect The Love Back
Every relationship begins and ends with you, so love yourself intently if you’re wanting it to come back to you somehow.

Once you begin to use others so they’ll shower you with their love, or you refuse to give it back, doing so only leads to insincere relationships.

Also be careful who you fall in love with. Make sure that they’re looking for love and not for help.

Learn How To Release The Power Of Your Subconscious Mind