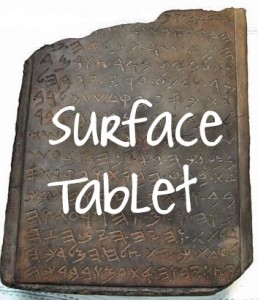 So absolutely anything significant that’s been released which is mobile, has been unfairly dubbed whether it’s a potential iPad killer, how it compares to the industry standard.

The new Microsoft Windows Surface RT Tablet, however, may possibly make a bit of an impact, this because of the features which the device offers that’s specific for the business crowd.

Brand names aside, technically, the better functioning and the more features it has, should simply be the better device. So when it comes to the brand new sparkling MS Surface, there’s solid evidence that Microsoft has embraced touch computing in a big way.

But the comparison is always how it stacks up against the almighty iPad. Is the Surface RT tablet better than the iPad. There are some significant and distinct features making this device attractive for businesses, who they’re obviously attempting to cater to.

Lets Get Connected
The Surface Tablet has several different options when it comes to connecting with other gadgets, such as Bluetooth 4.0, which allows you to connect with devices such as digital pens.

There’s a microSD port allowing you to load videos and images, along with USB ports allowing you to connect to a variety of hardware, such as, webcams, keyboards, mouse, and practically any other “add-on” which doesn’t need a driver that’s specific for Windows 8 desktops.

What Do You Mean A Real Keyboard
What may be one step ahead of the current iPad is that the Surface has a hard keyboard. Once you see others tapping away on the iPads virtual keyboard, at times, you wonder how they do it.

The brilliance of the Surface RT is that the cover of the device also doubles as a physical keyboard. Since the keyboard keys are slightly raised, it allows those who like to speed type make their stokes accurate and efficiently.

The device also comes with a stand which holds the Surface RT upright, allowing you to fold the cover and then prop up the tablet. Then you can begin typing away, wherever you are, much like you would a notebook PC.

There are also a variety of colors that Microsoft offers as well, which easily snaps into place with a simple click.

How’s The Battery Life
Face it, recharging is a pain and one thing technology is yet to solve. So when out on the road, you’re constantly looking for outlets in hotel rooms and airports, needing to recharge these portable devices.

The Surface RT battery will last close to 10 hours, so the intervals between charges may not be as often as on the other devices. 10 hours should be enough juice time to get from meeting to meeting, or once you jump off the jet.

Quality Of The Screen
The actual screen of the Surface appears sharp and crisp, something that the majority of Android tablets don’t offer. This because of 400 nits, which makes it bright as well as readable, even when outdoors.

The resolution is comparable with most laptops, and Microsoft has incorporated a smoothing technology which improves readability. All of the gestures and swipes work well, and the various colors appear excellent when viewing images, or when playing games.

When it comes to Tablet PCs, the screen is usually the most important feature since that’s what you look at and tap all day. The iPad gets points for offering higher resolution, but the Surface tablet appears to offer better text clarity as well as better overall brightness.

Microsoft Office Apps Gratis
Microsoft also includes their Suite of Office 2013 apps on the Surface tablet for no charge. This is a major bonus when it comes to the business users. The app suite employs a fresh clean design which operates efficiently on the processor which runs the Surface.

What’s included are the three most popular Office products, Word, Excel, and PowerPoint, along with the latest version of OneNote, which is a data gathering utility.

One of the best features regarding Word is being able to save the documents directly to MS SkyDrive, for cloud storage. Know that the Office apps aren’t for commercial usage, but there is a licensing option for businesses wishing to do so.

Best For Business Use
The Microsoft Surface when it comes to business productivity is the best tablet available. This tablet based on Microsoft’s Windows RT hardware and it’s Window’s 8 operating system, is the flagship of their new touch-screen focused Windows offerings.

The Surface has an advantage over the other tablets because of it’s superior design, it’s gesture driven menu, it’s unique split-screen, and a powerful search tool feature.

There are also some lingering reminders, however, that this is still a Windows product because of it’s stale remnants. The Metro interface is extremely versatile and innovative, but also has a bit of a learning curve to properly learn.

The support for the apps are also reportedly poor, while the performance of Internet Explorer 10 is at times slow. So some of the reasons why those who abandoned Windows in the first place, still remains.

The Microsoft Surface RT tablet isn’t suitable for everyone. For those who are looking for hundreds of apps, this may not be for you. What the Microsoft Surface RT Tablet PC does is it attempts to replace your laptop or desktop, and this particular device currently does so better than anything else available.

Tips On Improving Your Eyesight If Your Vision Gets Blurry