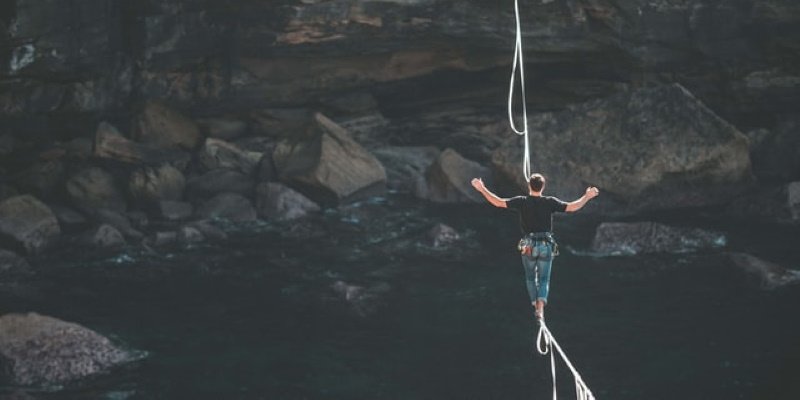 We all take risks on a daily basis. We’ll cross the street against oncoming traffic, wear red instead of blue. We all differ in our appetite, from those who are adrenaline junkies, to those who are extremely cautious. There are some who are unwilling to take any degree of risk in their life.

Taking risks is a thought process of the immediate environment, the degree of how safe you want to feel. All this is a result of evolutionary conditioning.

You decide what’s healthy, safe or comfortable for yourself. How successful you become, depends on how much risk you’re willing to take. Risk and reward.

Those who are overconfident, cocky, may minify the potential threats which may be posed by risk. Those who lack self-esteem might shiver at the slightest fright.

One person’s idea of fun such as skydiving, is another persons source of absolute pure terror.

Some are just too cautious and timid and will hide under the bed sheets the entire day, is also a risky position to take.

On a daily basis, we’re forced to make these personal decisions all related to a degree of risk.

Those who are on the polar ends of risk taking, the safe and the dangerous are both in peril. The super brave adventurer and the bookworm nerd who’s afraid of their own shadow.

Both have to reform their habits, attitudes, and comfort levels which aren’t great for their mental and physical health.

Doing so affects their behavior at home or work. One appears paralyzed while the other seems reckless.

It also depends on the type of risk, such as our health, finances, ethical, or recreational dares people are willing to take, which are at stake.

There appears to be a blanket consistency in everything most decide.

There are the risk averse and the risk embracing. Those who takes risks in one setting, will do so to the same degree in other.

One’s personality also plays a part. What individuals determine differently is how risky situations are perceived and appraised.

Essentially their propensity to taking the particular risk is individually different, this usually based on experience.

Situational, along with social and cultural factors also plays a part in a person’s degree of risk taking.

What it grounds down to is their particular perception of the situation, past results, and what they have to lose.

Those cautious and pessimistic types, who are afraid to take any degree of risk are terrified of failure. So they never change, remain boring as they favor tradition and convention.

They’re wary of any change and become terrified. So they stay routine, as anything new or innovative is scary.

Those who are prudent, will value predictability and continuity to anything that’s new and different. They’re extremely careful, conservative, and conventional in their outlook.

The average risk taker is known to be deliberate. They’re usually even tempered, assure of themselves and well prepared.

Their risk taking is calculated more by thinking rather than impulse. They’re systematic and sensible, while not being influenced by the radical.

What Type Of Risk Taker Are You

Some are the spontaneous type, who are also average in their risk taking, but on occasion they react emotionally and go overboard.

They can get overly excited, and become impulsive to the ups and downs of high hopes along with disappointment.

The composed individual, who appears sensible and balanced won’t be swayed from their task at hand.

They’re positive, resilient and dependable. They are not thought of as being reckless, as they’ll focus on their priorities, plans or goals.

What the free thinking carefree type does, is value their independence and autonomy.

They function well in fast moving situations and are stabilized by their sense of precise direction. They enjoy creating new ground while challenging the status-quo.

Then there’s the ultimate radical risk taker. Those who has an extremely high risk tolerance, the adventurers. They’re constantly upbeat, positive, daring, and cool.

They can be seen as impulsive, rarely organized, always looking for a new thrill which can cost them money or a limb.

They act as if the laws of fate favors them, and will boldly go where most dare not. They will throw a dice risking their entire savings on red.

The Measurement Of Risk

What their attitude was regarding it, when it comes to the situations they’re faced with.

This is usually predicted by the individuals behavior, when it comes to a range of different risk taking situations.

The theory being, their past experiences will predict their future actions.

The more of whatever action they did in the past, and the more they found it exciting, successful, or pleasurable. The more they’re likely to repeat the same act in the future.

It Is What It Is

Another measurement comes down to a personality variable that’s related to taking that risk.

This can be a need for achievement or some other type of specialist variable. The most popular being sensation seeking.

An investor who’s conservative, is one who prefers lower guaranteed returns with all the risks known. Rather than potentially higher returns from an unpredictable volatile market.

A risk averse investor will avoid any type of risk at all costs.

They’ll stay away from high risk, high return investments, while preferring investments which are guaranteed and provides a sure return.

So they’ll invest in the security of government bonds and index funds.

A person’s propensity to taking risk is determined by their perception of the situation. What they feel comfortable with, which suits their personality.

What risk and safety experts claim, is there are a lot of attempts to minimize their risk taking tolerance, often fail to take into account their personality.

Natural Foods Which Forces Blood Through The Arteries