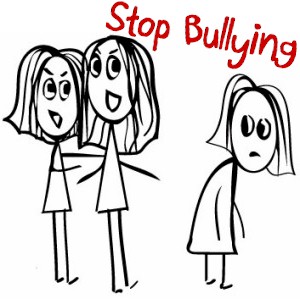 We don’t live in a perfect world where everyone is nice to you. Intimidation and Bullying is a fact of life which is usually passed down in the family setting.

The parent has a tough day at work, intimidated by his boss or a co-worker, and at the dinner table, passes it down to their kids. They do so usually out of sheer frustration.

The kids in turn will then either cower in fear and become victims themselves, or begin bullying the weak at school as an outlet.

So what about the person, usually the victim who’s on the receiving end. Do you tell them to become more assertive, and resilient, while preaching them the golden rule, and then the bullying will stop?

What then is bullying anyways, as it appears to have a long laundry list of definition. Is it forcing another kid to do your homework, or stealing his lunch money, which would be intimidation and theft. Is it the bigger student beating up on a smaller one, which in a real life setting would be assault. How about a slur that’s addressed to another because they’re a visible minority or religion. That has to be bullying, right? The most simple definition would be one individual harassing another because of a difference, for no reason.

The term bullying has also traditionally been referred to as a minor level adolescent problem, where kids will harass others at the playground with the consequences usually resulting in non-lethal action.

More Outlets To Bullying
With everything else kept relatively constant, the kids of today are generally thought to be smarter and more educated than their parents. The primary reason being that technology is rapidly advancing, allowing for more resources being made available.

The kids of today have instant access to information which their parents never did. The internet and its problem child, social media, being the most obvious culprits.

So because of this easy Web access, if someone who may be mean spirited can now easily take their “grudge” outside of the classroom and just proceed to slander someone, anonymously, by just posting lies about them online.

Although the belief is that the kids are still being taught the same morals and principles which their parents were, the resources of easy outlets which are available today to these kids, weren’t available to their parents as they are now.

Our kids just have more access which helps them to become smarter quicker, and become prepared and aware a lot sooner than any time in history. Learning to be resilient, and becoming assertive are still the best strategies in putting a stop to bullying, but that always doesn’t work if the taunting goes viral.

Bullies In Adult Life
Bullying has traditionally been focused primarily on school-aged kids, but we all know that it’s common in the workplace as well. The biggest assumption being that the adult bullies of today were the bullies of yesterday. The idea remains that the bully in school never grew up, and still has a need to verbally or physically beat someone up.

Others will just classify bullying as a built in defense mechanism which establishes or maintains the feeling of power over others. Another theory is that bullies, kids and adults alike, are just attempting to overcompensate for their feelings of insecurity, masking the fear that they may be bullied or be vulnerable themselves.

So what they do is attempt to turn the tables to develop a sense of superiority which just covers their own discomfort of being inferior. Most likely, all of the above are true under different circumstances.

Bullying Is Not Gender Specific
Bullying isn’t reserved for little boys with big temperaments who like to dissect frogs for kicks. There are also female bullies abound in the playground, cafeterias, and at the workplace as well.

There’s this notion that a girl being a bully doesn’t exist, and is a rare and mysterious phenomenon which is difficult to comprehend, this since girls are just generally kind, soft, and nurturing.

One hypothesis for this is that women are forced to become bullies, and act like their male counterparts, just to survive and compete in this dog-eat-dog world that we live in.

But it’s quite obvious that both genders can be extremely cruel to each other and behave like their primitive ancestors of centuries ago. This not because they’re trying to emulate someone else, but simply because of that’s who and what the human species is, which is survival of the fittest.

Society will usually pinpoint and associate bullies as being typically male, but once the characteristics and the roots are investigated, there are fundamental similarities which doesn’t discriminate because of gender. It’s becoming more and more aware that little girls wearing pink can and are just as vicious as a mean little boy who has a habit of picking his nose.

Putting A Stop To Bullying
So it doesn’t matter if one grows up wearing a skirt or a pair of pants. It’s the behavior of needing to push around or intimidate another individual which is the core issue. Girls and boys alike can be absolutely mean to one another, and for no good reason.

So if a bully ever happens to cross your path, keep one thing in mind, which is that they will back off once you expose them for who they are, and will usually retreat. But that’s easier said than done.