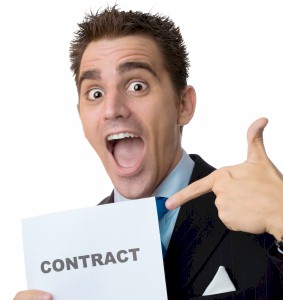 The majority who sell for a living have no idea on how to close the sale, get the deal. If they do, it’s usually by sheer accident, surrendering to the numbers game. The best of the closers, however, are continuously and relentlessly paving a path to corner in the deal.

Most salespeople simply just avoid asking for the sale, they become apprehensive to ask the prospect if they want to buy, today. The reason being a barrier built on the fear of rejection. They’re just simply afraid that the answer is going to be “no.”

The salesperson doesn’t want to feel rejected once again, thinking that it’s because of them. All of the hard work, all of the time and effort they just spent with the customer can completely go down the drain by they saying “no,” how dare they. So why even bother asking.

The most common and worst perception is that, by not asking for the sale, and not closing the deal, the salesperson can then continue to enjoy the belief and feeling that they still have a chance of getting the business.

What then happens is that the salesperson, as a result, becomes aloof by hoping that the customer, usually out of pity, will volunteer to buy. “Oh, here Johnny, here’s my credit card, now give me the product!” This rarely happens.

Closing it out is the one singular step that a salesman needs to take by asking for the order, every time. Anyone who sells for a living should at the very least be aware of the clinical methods which the professional closers use to get the sale, more often than not.

There are steps that all salespeople can take to better the odds of they getting the sale, this by eliminating as many objectives as possible.

Ways Of Closing A Sale

Closing On A “No”
Closing Method: Make sure that you ask a question to your client which will elicit a “no” response, which actually means a “yes” when it comes to the close.

For Instance: “Mark, do you see any reason, if we gave you this product at this price, that you wouldn’t go ahead and do business with us?”

The Advantage: The majority of customers will have a mindset of being as pessimistic and resistant as possible, where they like to find fault and nit-pick over minor issues. Also keep in mind if this tactic backfires and their answer is “yes,” then continue, or it usually means that they’re not going to buy.

Closing On Assumption
Closing Method: You direct a well crafted question that, once the customer answers it, it’ll then commit the customer to purchase the product.

For Instance: “Mark, help me in understanding your process, as well as how your company is planning to purchase this product.”

The Advantage: During the process, if you’re not sure that the customer is convinced about buying, talking about the specific details will confirm whether the customer has made up their mind to buy, or if they need further discussion. You need to be careful, however, if your delivery is too forceful, then it may appear as manipulative.

For Instance: “Mark, why don’t we just move forward on this?”

The Advantage: You can go ahead and use this close once you’ve received several “green lights” which signals that the customer is edging towards buying. This closing method also has an additional benefit, this by positioning the purchase as a mutual agreement between two equals, rather than it being a supplication from the seller passed down to the buyer.

Closing Based On A Time Limit
Closing Method: You attach the purchase based on a limited time line which your customer knows and is aware of, or one he created himself.

For Instance: “Mark, you said that you needed to decide by tomorrow at this time, so why don’t we figure out what we need to do today.”

The Advantage: This once the customer has self committed to reaching a specific decision within a set specific time. You can also try using this as an intermediate close, leading towards the next step, which lays down the groundwork for that final close.

Closing On A Direct Question
Closing Method: You capsulize the conversation, or the entire series of conversations that you’ve had, and then just simply ask for the business.

For Instance: “Mark, it appears that we’ve answered all of the questions, so can we move forward with this?”

The Advantage: This can be considered the general all purpose, “Swiss army knife” close, which can and should be used in almost every sales situation. It should never appear that manipulative, this since the customer is almost expecting it, and as a result, it seldom backfires. If the answer happens to be a no, however, then begin a conversation which investigates why they aren’t ready to buy yet.

Closing The Sale
What you don’t actually need is that big iron fisted “hammer” close, as most sales reps are led to believe. What you’ll do is risk losing the customer completely once you decide to save it all for the end.

So make sure that you keep the customer as actively involved as possible throughout the entire process, including your presentation. This should improve your closing ratio.

It occurs much too often that the majority of salespeople will just regurgitate the same “canned” singular sales pitch on everyone, and expect it to work every time, under each and every circumstance. It never usually does.

The prospect, the potential customer will begin to tune you out since you’re not engaging them into the process. The way to relieve this is to ask simple questions along the way, which monitors where they’re at based on the feedback.

Getting Back On Balance By Refocusing Your Work And Life