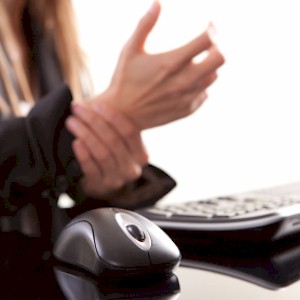 Our bodies are structured in a way that injuries can occur at anytime anywhere. We usually experience this pain where we spend the majority of our time, which is the workplace. The reason for most of these chronic injuries is because of one-way muscle movement.

What this constant unidirectional movement does is causes an imbalance in the musculoskeletal system, which results in overuse in one area, and under use in another. If this is left unattended, these injuries can become chronic, resulting in constant pain.

Once this imbalance occurs, the body then doesn’t function as intended, as the muscles which should be working together to perform specific functions, begins to work against each other. This causes the muscle to exert more energy to perform the same task.

Muscles Begin To Dysfunction
Once the muscles become too short and tightens, what they lose is their strength, as they’re in a chronic semi-contracted state, which can’t respond efficiently, this due to it becoming fatigued.

If the muscle was already previously in a shortened semi-contracted state, then it can’t shorten any further. The farther that a muscle is able to move, the more strength and endurance that the muscle will have.

What chronically tight, restrictive muscles won’t do is function well, while they also impinge on structures around and beneath them, such as effecting blood vessels and nerves, which as a result, causes disorders such as Carpal Tunnel Syndrome.

What shortened muscles will also do is pull bones out of alignment, which then causes joint imbalance, that often results in severe pain and dysfunction.

Underused Muscles
The same goes for underused and underdeveloped muscles, as they become weak due to a lack of direct stimulation. Weak muscles are conversely too long unless they’re in a state of spasm, which is a protective response from being overstretched.

These weak underdeveloped muscles can’t act as efficient stabilizers once the opposing muscle is called into action, which then causes joint imbalance to develop, this due to weak muscles not able to stabilize the bones in their proper alignment.

Regardless if a muscle is short and tight, or it’s long and weak, the strength and the length imbalance of the affected muscle needs to be corrected, this for the body to function properly without pain, or to avoid dysfunction and reduced mobility of the joints.

Cause Of Muscle Imbalance
Muscle imbalances can become disorders such as Carpal Tunnel Syndrome to Thoracic Outlet Syndrome. What most will prescribe for these conditions is the “band-aid” principal, allowing the muscle imbalance to continue with minimal relief.

What’s needed instead are the appropriate exercises along with stretch routines, then the majority of the musculoskeletal disorders can be effectively eliminated.

To Correct Imbalance
Correcting muscle imbalance can be achieved through a number of proven stretches and exercises. Soft-tissue treatment along with hot/cold therapy can also be applied to help expedite the recovery rate.

Performing stretches along with exercises is an effective method of eliminating the existing condition, this without further soft tissue treatment or hydrotherapy.

What needs to be made known is that there’s a treatment sequence that should be addressed for best results. If the stretches and exercises are performed randomly, then the individual may be causing further injury.

Applying Heat Therapy
Use a heating pad for 5 minutes, this to warm the affected joint along with the surrounding muscles, this to prepare them for the upcoming stretches and exercises.

What becomes critical is making sure that all sides of the joint, along with the muscles which are surrounding it, are completely warmed-up.

Transverse Friction Massage (TFM) applied on weak injured muscles or tendons, breaks down adhesion on the soft tissues, while also effectively reducing overall pain and dysfunction. Performing massage on the tight muscles is found the most effective.

Best Stretching Routine
Once the muscles are warm, stretching the tight restrictive muscle group becomes the key to increasing muscle length, while reducing the impingement of the surrounding tissues, which reduces the misalignment of the joint.

Stretching the weak, underdeveloped muscles isn’t recommended as they’re already too long, so they don’t need to be lengthened any further.

Best Exercise Routine
Once the short tight restrictive muscles are lengthened from stretching, then the opposing muscle group needs to be exercised as it’s weak and underdeveloped. So shorten and then strengthen the muscles to reduce the tensile stresses imposed on them.

Exercising the weak underdeveloped muscles forces the opposing muscle group to relax while lengthening it, while also helping to maintain the length that was created in the muscles from the stretching.

What’s important is to not perform stretches after the exercises, as what doing so will misalign the joints, which causes muscle rebounding. Always stretch first when addressing chronic muscle imbalance, this before doing the exercises.

Contrast Bath
A bath at the end of the routine can be beneficial as it will reduce muscle spasms, while removing toxins from the muscles, along with increasing circulation and overall nutrient flow to the injury.

What it also does is helps in the recovery process. What a contrast bath involves is applying 3-minutes of heat, then 1-minute of cold to the affected area. Repeat this process 3-times, finishing with cold.

This treatment is for chronic repetitive strain injuries from muscle imbalances, which is found effective as it eliminates all the symptoms that’s associated with the injury.

The New And Improved Ways Of Acquiring More Online Customers