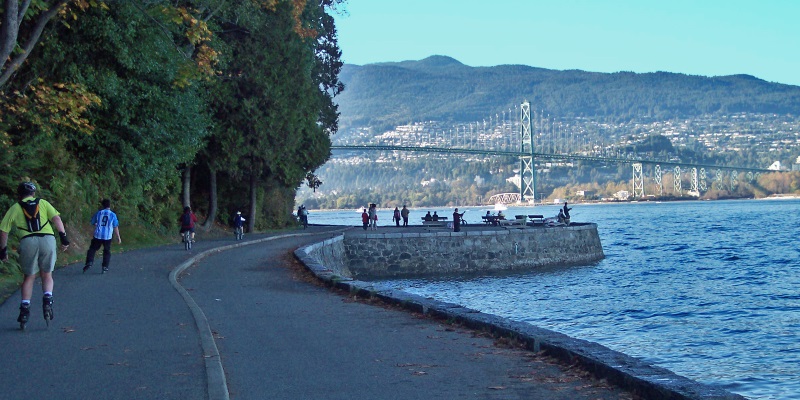 This is about running, but it’s much more than that. Running is putting on a pair of jogging shoes and pounding the pavement. What it does once getting into the “flow,” is it slows down and encapsulates the surroundings and life, in a single trot around the park.

As a new day unfolds, what’s lurking from the past in the remnants of memories, are ghosts of the present, as I waver back and forth, uncertain. I tether between anger and relaxation, stress and anxiety, sad and happiness, and then relief.

Any given day can be such a day. So this day began like any other, as I readied myself for another run around the Stanley Park seawall, in beautiful Vancouver, BC.

A breathtaking 9 kilometer run which offers cityscape views, every twist leading to bridges then mountaintops, all surrounded by the crashing waves. It snakes it’s way around the carve of the cliffs, its final destination Third beach.

There are always mixed feelings about this run, apprehension when first warming up, as there are threats of pain in the shins, and the gasping for air in the lungs.

The agony of the pain in the joints fade, once the blood fuels the muscles as adrenaline takes over, and the jog becomes enjoyable. The run becomes peaceful, as the splattering of rain this day, becomes a soothing sensation.

There is marginal overcrowding on this summer day, littered with other fellow runners and daredevil cyclists.

Navigating through the littered crowd, the tourists and the dogs, the goal like any other day, is to best my previous time of run, along with pacing myself to avoid cramping.

Progress Related Effects
Okay, this really isn’t about running, but it’s more of a condensed example of making goals. The point being how our emotions can influence and become affected, by we attempting to reach them.

Standing at the start line seconds before the run, there’s excitement and anxiety regarding the possibility of a great run, the potential of a new personal time, or the muscles becoming dehydrated and causing too much pain.

The process on how this goal might be reached, the physical process which is putting one leg in front of the other, hopefully feeling less pain than yesterday, is the objective. The run then begins around the park.

This arduous run, which is the massive pounding of humanity per square inch, landing forcefully on the soles of the feet. What many wonder, what the bystanders don’t understand, is why the hell is this guy running.

I tell myself “I can do this,” as the steps turn into kilometers, while realizing that there’s better use of my time, such as eating, napping or taking a bath. This rather than putting on my running shoes and facing public ridicule.

The Point Of Setting Goals
What setting goals and the emotions it activates, acts as a signal, a guideline and a marker that tells us whether or not we’re making any progress in our life, in this world.

What this leads to is a relatively intuitive prediction, which turns into feeling positive emotions such as elation and relief, this once we make any progress, or once the goal is achieved.

More specifically, we feel joy if there’s an increase in our progress and it’s sufficient enough, that we seen noticeable gain.

We feel badly such as anxiousness when we don’t make progress. We feel physical pain such as our knees beginning to hurt, which is end result of failure.

Mood And Goal Setting
What research has focused on, is the effects of what general mood has on we striving towards our goals, this rather than progress related emotions.

What’s found, is that the consequences of making progress, depends partially on whether or not the goal was expected to be reached or not.

Among those who expected to reach their goals, feeling bad about their progress actually becomes motivating, this because what it does is signals the need to take action, where feeling good is not as motivating.

The reason for this is because what it signals, is that the current rate of progress is good enough, so no further action is needed.

Conversely, those who are less sure that they’ll complete their goal, and are feeling bad about the progress which becomes demotivating, because it confirms is that the goal can’t be reached.

So the key becomes knowing how progress related affect, can influence the various goals that we are striving towards, such as eating more healthier, consuming less alcohol; doing more exercise, etc.

Applying Progress Related Emotions
So if you’re wanting to use progress related emotions for yourself, there are several steps that you can take.

For instance, make a list of the things that you’ve done recently, in the attempts to achieving your goals, which should be motivating, this especially if you’ve just started trying to achieve this certain goal.

Just thinking about reaching any of these goals, what I’ll think about is all of the training that I’ve done so far, such as running 5k, running in adverse weather, or cycling to stay in shape.

In contrast, once you’ve nearly completed your goal, then make a list of all the things that you’ll still need to do, as this appears to be the best strategy.

For instance, I might be thinking that I still have more training to do, even though I’ve already done plenty of training thus far.

Tracking Your Progress
Being aware of how you feel when it comes to your progress, may prove to be crucial.

Feeling negative regardless of what it appears to be, making poor progress when first starting out to achieve a goal, could prove to be detrimental, this to the point that it could lead you to abandoning that goal.

What being completely aware of how your emotions can derail your goals, can enable you to overcome them, which will hopefully help you achieve the goal itself.

Why People Run
So the next time you’re at the park or walking down the street, and you happen to see a jogger who appears to be laboring as they run past you, the first reaction is to snicker, mock, or tell them “way to go.”

Realize that there’s a complete host of reasons why people run. It appears to be painful, human sacrifice, as why would they publicly hurt and embarrass themselves that way?

Know that they have a completely different agenda than you. They appear to be punishing themselves, but it’s more a public statement on getting better.

Their goal, what they’re attempting on a daily basis, is that they’re wanting to get better than they were yesterday.

7 "Fast Food" Favorites That Are Good For You