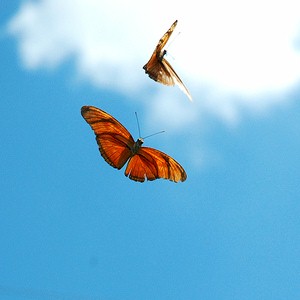 Life loves to give more than it receives. This Universal law dictates that we get what we ask for provided that we follow certain rules, protocol. The belief that everything begins with a certain thought form.

A thought, any thought regardless of how strong or true it is, whether it’s intentions are good or bad, is bottled energy. What energy doesn’t want is to be boxed in, or remain stagnant, as it wants to manifest itself.

So if a lot of the same thoughts are focused in one direction, that this stream of energy is forced in the same flow, it will eventually come true in the real world, there’s no other choice for it not to.

Life is programmed so it will give you whatever you ask for. Almost everyone, however, will claim that this doesn’t work. They’ll say that they’ll ask for freedom, riches, or happiness, but all they ever get are feelings of bad or imprisonment.

So what needs to be looked at is how creation actually works, and goes into motion. How our subconscious mind works to activate these thoughts since that’s the basis for all movement.

Everything Begins With
Everything that exists, everything that’s around you was created because of a single thought form. It begins by someones imagination, first. Everything begins with an idea which manifests into reality, the real world.

When we’re not conscious of this, then like the majority of others, we abuse this power to create usually negative thoughts, which results in a negative life. We are what we think of and thus become, like it or not.

Then once we learn how to properly project positive thoughts, then there’s no other option for the universe to grant us the positive results that we think of in our lives.

The earth just won’t interfere because it doesn’t know who you are. The universe is patient, willing, and listens to every request. They work in tandem and in silence while giving you exactly what you ask for, and nothing else.

It’s known that we’ll get the exact return that we put in. For instance, once we plant seeds for yellow roses in our garden, nurture it, then it will eventually bloom into beautiful yellow roses. When we plant these roses in the garden, we don’t and won’t get or expect onions.

Then There’s Real Life
But this is the exact opposite of how we react in our real lives. What we plant are onions, yet we expect roses. We sow negative thoughts in our minds, but expect positive things to happen to us.

We constantly fool ourselves by wondering why things never work out. We then look out for who’s responsible or at fault. We then usually begin pointing fingers at our parents, spouse, or whomever else.

Then we’ll begin to sulk, “woe is me,” and claim that we never have any luck in our lives, that we’re cursed. We then look at the neighbors, our siblings, or our friends and think how they can be so lucky.

All of the roses are blooming in their garden, and we begin to wonder what we did wrong. We don’t realize that we get what we ask for.

A Negative Mind
Did you know that the majority of your mainstream thoughts which filters through your brain are naturally negative. It’s thought that up to 75% percent of your life consists of negative thoughts, so that means 75% percent of your results will be negative.

These are the thoughts which resides in your subconscious mind, and will execute exactly what you feed it. It’s also exactly what the earth and universe will react back with.

Your thought forms are much like a computer search on the Internet. Once you perform a search for: “Why am I so fat, and why am I so stupid, I’m ugly, and nobody likes me.” What Google will return are results for: why you’re fat, ugly, and stupid.

So would you then throw a brick through your computer monitor blaming it because that’s the reason why your life is so crappy. No, this once you realize that you’ll get back what ever information that you type into it. The input exactly matches the output, as does life.

Our Subconscious Mind Has The Same Input/Output
Our subconscious minds reacts and behaves the same way. If you don’t like or want the output, then you need to change the input. You’ll always get exactly what you ask for, whatever you think of the most during the day.

So don’t get angry or frustrated with your life. Instead of getting, being, or remaining angry, learn how the exchange works, and then learn how to get the desired positive results that you want in your life.

Begin thinking positive thoughts at all times regardless of how dire things may appear. Always think of thoughts which you wish or want to see happen in your real life, then they will happen.

Just think of the thoughts which you want to come true for you. Then once it’s activated, just be patient, have faith, and wait for it. Then one day, hopefully soon, you’ll begin harvesting what you sow.

The earth and universe will have no other choice than to give back what you sincerely ask for, what you put into it. The request is never lost or ignored, all that you need to do is take action.

Why The Confirmation Page Is Vital To The Online Sales Process