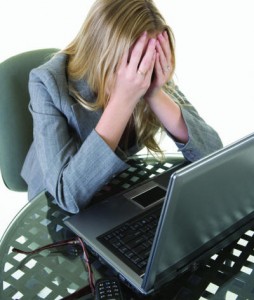 So you’re sitting there and staring intently at your computer screen, why oh why my dear PC are you so slow. We have all experienced this at one time or another as the computer machine slowly plugs away. Well, there is help, there are ways and methods on how you can troubleshoot the problem and possibly even find a quick fix solution to speed it up.

Along with pondering important life altering questions such as, where do lost socks go when doing the laundry, or do stairs go up or down? Why is my computer running so slow is a very valid question. And there may be actual reasons as well as a few solutions.

To begin with, all computer systems much like your car, differ in mileage once they are used for a while. All of the software that’s installed is completely different as is the specific usage history of your system vastly differs from any other.

So it’s difficult to exactly pinpoint the exact source of the problem. Nonetheless, there are some common general trouble spots which you can look at to give that old PC the needed jolt in speed.

Know Your Computer Hardware
It’s important that you know what type of hardware that your desktop, laptop or netbook PC is running on. But don’t go grab your screwdriver and a hammer or some third-party software program to try to figure this out. If you are a true techno geek and built the PC yourself, then you would obviously know whats in it. If you bought a generic brand name computer, just look up the manufacturer specifications online.

Being familiar with the components in your PC helps you in troubleshooting the speed issues. First, it will give you the opportunity to recognize by listening or looking to see if something is wrong. Is your computer beginning to emit strange odd noises, which could just be a bad fan, or it could possible be the “click of death,” yikes, that may mean that your hard drive is nearing extinction.

Do you hear random sounds coming out of your speakers whenever you’re performing a specific task on Windows? Does your disk drive make an odd new sound which you’ve never heard before when it’s spinning a disc? Just listening to these sounds can often help you in what the problem may potentially be.

Also, understanding the hardware will allow you to pinpoint issues which you’re able to search within Windows itself. As an example, you can pull up Task Manager (which is Ctrl-Alt-Delete, and then select Task Manager), and realize that your system has only has 1GB of RAM that’s listed in the Performance tab.

But you’re certain that by checking the specs, your computer was shipped with 4GB of DRAM. So what may of happened is that the sudden slowdown is because one of the RAM memory sticks may of suddenly went bad.

You can apply similar reasoning to your CPU which may be underclocked, to missing capacity within a storage array. There could even be a sudden absence of components such as an optical drive which you’d expect to see listed on your system. This may indicate that your motherboard is gasping for air, and as a result is directly affecting the overall performance of your PC.

Make Sure That You Stay Up On All The Updates
If you’re able to pick either a 1995 car or a 2010 version of the same vehicle, which one would you pick? Well, obviously the newer one of course. But most don’t bother to use the same logical reasoning when it comes down to their PC’s operating system, hardware or software.

There are a few major types of updates that you’re able to apply to your computer. First are software updates, newer versions of the existing applications which are currently installed on your PC. Some software companies will notify you of any available updates by using tiny icons in your taskbar, or by using pop-up windows which are within the application itself.

Driver updates are specific pieces of software which allows Windows to be able to communicate with one of your hardware devices on your system. One example is firmware updates which is related to app-level software programs, that’s stored directly on the device’s memory, which is the operating brain of say your wireless router or digital camera.

You may be wondering, why is this important? It’s important because these updates which affects your hardware and software could directly influence your system’s performance when doing various tasks. For example, remember those slow file transfers on the original release of Windows Vista which Microsoft corrected immediately with Service Pack 1, and the performance instantly improved.

Before you begin worrying about alternate methods of bringing your sluggish PC up to speed, check to ensure that that your computers software and hardware has the latest available updates installed. If you fire up the latest installed versions, you may suddenly find that the speed problem vanishes.

Scientifically Speeding Up The Slug Machine
If you’ve noticed a slowdown on your PC when you’re using a specific application, or when performing a particular PC process, then try to review what you did differently since the last time that program performed properly.

If your PC’s Web browser’s ability to render or display pages has suddenly slowed down, then pay close attention to the number of tabs that you may have open, as well as what the tabs contain. Have you installed way too many add-ons to your Internet browser? Did your computer just suddenly crash recently while surfing the net, when something like that happens, the best solution is performing a full uninstall and then a reinstall of that browser program.

If you’re constantly wanting to always multitask or play a lot of games, but your computer is delivering significantly slower speeds than what you’re previously accustomed to, look for the causes more methodically. Is there an application or even an errant program which is running in the background which is eating up your computers resources?

Pull up the Windows Task Manager again and then check the available memory as well as the CPU usage. Are you downloading in the background, a gigantic file that’s sucking up your bandwidth, and thus making your online game playing sluggish?

Since there are usually multiple explanations which are possible, the simplest answer or the most obvious is the one that’s most likely correct. In most cases when it comes to system slowdowns, the likeliest culprit may be you. What have you done lately that may make your computer become slow? So in short of a Windows System Restore, or even a full system reinstall, you can begin with what your most recent actions were.

Your Biggest Help May Be Windows Itself
So before you go out and pay heavily for computer repairs or decide to buy a brand new computer, or buy software solutions which promises to warp speed up your PC, instead, use the excellent free diagnostic tools which are available within Windows Vista and Windows 7.

Begin by consulting the ‘Performance Information and Tools’ section which is found in the Control Panel. Inside there, you will find an Advanced link which will link to all of your computer operating system’s performance related utilities. Then compare the Windows suggested speed of your computer in its original, brand-new state with Windows’ current assessment of your system’s performance. Then run the Windows Experience Index again.

Windows’ “Event Viewer” will take you behind the Operating System so you can see what Windows has flagged or recorded as an error, warning, or a critical issue. These records however can be difficult or almost impossible to understand, which depends on the problem which is at hand. But they should be able to help you in troubleshooting the exact situation or at the very least notify an adviser what the issues may be.

The Performance Monitor is a method which in “real-time,” displays how your computer is using its system and hardware resources. Although it’s in more of a descriptive rather than in diagnostic form, it may just point you in the proper direction for you to be able to identify your system’s performance or speed bottleneck issues.

The quickest way may be to just use Windows’ System Health Report. The OS will then scan your usage activity for a few minutes and then offer you suggestions on how you can maximize your system’s capabilities.

The obvious best fix is some type of “super duper tool” which would scan your computer and then eliminate all of the junk which is slowing down your PC, while giving you a quick speedy computing experience that would last for weeks or months.

Well, technically, something like that does exist, and that’s when you wipe out and then reinstall your Windows OS. But this is obviously a drastic measure. There is no one perfect solution for transforming your sluggish system into a speed beast. The underlying problem may be hardware issues, specific software issues, a variety of viruses including malware etc., and the operating system.