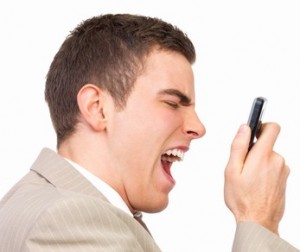 You’ve just made or received that pretty significant purchase, you got that laptop computer, a 50in LED flat panel television, bought a new car, or a new refrigerator. But then, just a week later, something goes awfully wrong with that purchase, and you instinctively being to fume. That high ticket product doesn’t quite work as stated or you ended up with a “lemon,” something that has a fatal flaw. You want a refund from the store.

You’re blood pressure naturally begins to rise and your blood begins to boil over. You’re now attempting to figure out how you’re going to deal with the situation at hand. Your first instinct is to immediately phone the retailer or dealer where you bought the product from.

So angrily, huffing and puffing, you begin to express your displeasure and dissatisfaction at the first person who answers, you’re immediately put on hold, then put through a variety of departments. Your mounting frustration almost makes it impossible for you to conduct a reasonable conversation. Then after a few minutes, you just decide to hang up, with absolutely nothing accomplished. Sound familiar?

Scenarios like these happen all the time. Whether it’s purchasing a big ticket item like a car, ranting about your cable or phone service, or even a slight overcharge on your credit card statement.

When there’s something that goes wrong and it involves money, even just a single dime, most will just go ballistic. You’re wanting to speak to someone, anyone, to help fix the problem. You feel helpless since there’s absolutely nothing that you can do.

These situations never have to turn out this way. You’ll be able to get some satisfactory results by applying a few basic principles of self control. The first thing you need to do is calm down, you know that sh#t happens.

So try to relax and calm yourself down by taking a few deep breaths and then clearing your mind. This wrath of anger which you feel is because of a surge of chemicals present in your brain which automatically activates itself when it feels threatened.

Obviously, if there’s an error and you’ve been shortchanged, or you paid too much, it’s always annoying. But from a personal level, when you feel that you’ve been ripped off, a primitive natural instinct kicks in which causes you to seek some type of retribution, after all, it’s your right.

You begin showing signs of regression, which is one of the most unproductive of the defense mechanisms. It’s the exactly instinct which prohibits you from getting the results that you want. So it’s best that you let the angry feelings subside by somehow channeling that energy towards a more productive strategy.

Once calmer, and your anger has subsided, you can then begin taking the right actions by following these steps:

How To Effectively Get Refunds

If there’s some type of stipulation and you can’t return it, then this makes the situation a little more more difficult to handle, but not impossible. So it’s always best you know what your entitled to, this way, you’ll be a lot better prepared to overcome any of the objections which the retailer directs your way.

For instance, if the merchant happens to have a strict “No Exchange” policy which you weren’t aware of when you bought the item, you might be entitled to some type of merchandise credit instead. For your own retribution to be as positive as possible, you’ll need all of your receipts.

If for some reason you’ve lost the receipt or tossed it out, then you should still be able to get the merchant or your credit card company to be able to produce some form of proof by tracing it back. This is the reason why it’s recommended that you use a credit card for any major purchases.

Know Who To Speak To
Know which department to speak to and be as nice and as calm as possible. How you decide to approach the customer service or refund representative will usually determine the outcome of your interaction. At times, the first person that you speak to on the phone is most likely not the person to resolve your problem.

So calmly explain your situation in detail, and then ask for the person or department in charge who’s able to deal with your problem. Being as pleasant as possible is the critical key on your behalf.

You’ll want to gain that person’s support, and you won’t if you’ve ticked that individual off. Speak with a tone which has a smile in your voice and you’ll sound that much more nicer and reasonable.

It begins with the first few words that come out of your mouth, the interaction should be as calm as possible. You need to remember that they have no idea what the nature of your call is, so make sure you greet them as if they were your friend, begin with “Hello, how are you?”

Know Exactly What You Want
Say that the airlines have botched up your travel itinerary by giving you the wrong departure time, causing you to miss your flight. Or you’re given bad service and not able to find an immediate and suitable solution. So to relieve this situation, they offer you a $200 travel voucher. Would that be suitable enough for you, or would you rather want some extra air miles added to your frequent flyer account instead.

If you go in with a clear set of goals in mind on what you want, rather than they dictating the terms to you, you should be able to emerge with something that’s more tangible than what they offer you, even if it doesn’t suffice for the original inconvenience.

When in cases that the retailer has treated you unsatisfactorily for the second time, then decide what you’d want back in return beforehand. You may be able to get extra valuable loyalty points, or credit on a future purchase. So it’s critically important that you have some type of plan in mind, provided you keep it reasonable.

Be As Persistent As Needed
After the runaround, it may be easy for you to get a little discouraged, so do whatever you can to avoid getting to that point. You may feel that there’s absolutely nothing else you’re able to do to fight for your right, and you may begin to feel that its not worth the effort. At times, this may be the case, and you may have to decide when to cut your losses.

However, unfortunately for the consumer, some merchants strategize on dominating themselves over you the customer through various methods of attrition and intimidation. They will throw a bunch of pointless obstacles directly your way since refunds are their biggest expense. They actually hire and train personnel to specialize in using these tactics to improve their bottom line.

It also takes surprisingly little effort to get past this since most of these “roadblocks” will be obviously pointless. For example, they by right may ask you to produce your original receipt, hoping you no longer have it. So if you kept all records, then that issue is easily resolved.

Take on each of the obstacles thrown your way, one at a time, and then decide what the best approach is to somehow overcome it. After few times, you may just wear them down.

Make Sure That You Show Your Full Gratitude
Once you finally get the desired outcome which you were looking for, then let the individual know by thanking them, as they will appreciate your gesture. You expressing your gratitude is something that they don’t experience very often, as these types of job positions are not always the most rewarding. Imagine spending your entire work day just listening to angry irate people screaming at you.

So expressing your “Thank You” when the problem is resolved will spread just a little cheer towards that individual for a job well done. Even if the outcome wasn’t that favorable, it’s not usually because of that person but more of store policy, so its nothing personal.

And who knows, you may need to contact that person again in the future. So in any case, making light of a bad situation will usually allow you to move on and forward, chalking it up as experience.

Definition Of A Narcissist You Know It's All About You