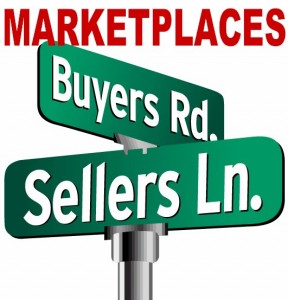 The majority of online retailers are not as successful as should or wanting to be. As a result, the dominant “Marketplaces” of the Web, such as the Amazon’s of the online world, are becoming a vital cog for most of these retailers.

It’s now estimated that close to 70% percent of all online businesses who market goods online, have some type of presence on at least one of the major online marketplaces.

A growing number of consumers are also beginning to use these “marketplaces,” which includes sites such as, Amazon, eBay, Buy.com etc., as their main source for their online shopping.

So as a result, the competition is becoming extremely fierce as the majority of these sellers are struggling to get themselves established, or being a “featured” seller on any of these sites, which leads towards generating additional revenue.

The biggest challenge for these merchants is determining how they can differentiate themselves from the other retailers who happen to be selling the exact same products. What they need to do is go beyond offering a better price, but using a calculated focused marketing strategy instead.

Optimizing For The Marketplaces
What marketplace optimization involves is the retailer improving their ranking when displaying their products on the various marketplaces. It’s common that there are multiple sellers who are offering the exact same item, while each of the marketplaces will also use their own proprietary algorithms to determine which of the sellers they should be featuring.

This marketplace optimization (MPO) becomes vital for merchants because of the continuous shifts in customer behavior and their buying habits. There are now a steady stream of consumers who are now completely bypassing the search engines, such as Google or Bing, and going directly to their favorite e-commerce marketplace when searching for products.

This is the primary reason why retailers should be increasing their MPO optimization tactics, instead of concentrating on SEO as they did in the past. It’s now becoming more important for the retailer’s to focusing their attention towards better catering to these marketplaces.

Better MPO is expected to become crucial for the retailers who are wanting to remain viable. There are also other factors which determines how merchants can become successful, listed are the most important ones.

Having Adequate Inventory Available
Having adequate levels of inventory available will directly result in an improved sell-through rate. There are too many variables which determines optimal allocation when better quantities of inventory are made available for distribution across the various marketplaces.

For example, during the times when it’s busy, such as Christmas, sellers should be removing their product from a marketplace once their inventory levels happens to reach a certain threshold, this to avoid cancellations.

This can be achieved by using inventory-allocating software which is configured to recognize the strength of sales on a particular product, and then automatically removing that product listing once it reaches a certain designated inventory level.

If the inventory levels become too low, risking potential sell-out, the software will de-list the product, avoiding costly cancellations and not damaging the merchants status.

Steps To Reducing Order Cancellations Online
The biggest cause for orders to be cancelled is because of incorrect inventory level readings. Merchants should know as well as display accurate “real-time” inventory levels so they can prevent overselling.

If a particular product happens to be advertised or featured across multiple marketplaces, and inventory-allocating software isn’t in place to synchronize and monitor inventory levels, the result will be inaccurate inventory readings, which then results in overselling, order cancellations, damaged reputation, and irate consumers.

Human error can also play a role when it comes to order cancellations, so using shipping software which tracks specific employee errors can also be a valuable tool when improving these rates.

In case overselling does occur, it’s also advised that the retailers have backup vendors/suppliers in place which can fulfill the orders once the stock becomes too low or depleted.

Dynamic Pricing Methods
Repricing a product involves going to a specific marketplace and finding other merchants who are selling the same product on “sale,” or at a lower price, and then either matching or beating the competitors price. Repricing products can also be implemented automatically using specific software, or it can be done manually.

There’s also a variety of strategies which can be used for repricing. For instance, all that a merchant who has a low cancellation rate needs to do is match the lowest price in order for them to elevate their chances of being featured in the “buy box.” A buy box is the area on the marketplace site where sellers are featured or recommended.

The most effective repricing systems takes into account the number of items which are on order, customer feedback, overall margins, and the sales strength across all of the marketplaces, which results in making better repricing decisions resulting in maximizing revenue.

Improving The Overall Consumer Experience
Positive feedback from customers is vital for the merchants success. To capitalize on this, retailers should be encouraging their customers to provide some type of “feedback” on their products, provided it’s done so ethically.

This type of request can be done manually or by using a CRM tool. If using CRM, it needs to be flexible enough to accommodate the different guidelines and rules of the various marketplaces.

If there happens to be negative feedback, the merchants should then be proactive by resolving the issue or issues as soon as possible. Once the issue has been corrected, you can then, in some cases, request for their original feedback to be updated.

The Most Affordable And Natural Anti-Aging Products Available