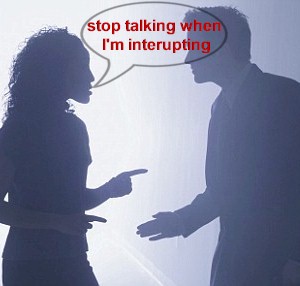 So what’s so fun about Dick and Jane and their relationship. Dick asks Jane how her day was, Jane then responds by saying, “Well,” as she places her hand on her temple.

“When I woke up this morning, I must of have just slept wrong, I had a bit of a headache, as well as a bit of a sore neck. I also had this odd dream about Susan from work, don’t know where that came from. I was going to wear my blue pants but then I couldn’t find them. I didn’t remember that I put them in the washer already… Anyways, then Mary phones me and said she was running late and will miss the meeting, and then I ….” Dick was sorry he asked.

The next day, Dick picks up Jane at work, and asks her how her day was. “Oh, you wouldn’t believe this,” says Jane, “My boss gave me 3 more clients than everyone else, so I was completely buried all day, I just couldn’t keep up, I’m totally exhausted…”

Dick replies, “Why does she always do this to you, I told you that you need to talk to them about this. Why won’t you just speak up.” Dick shaking his head in disbelief.

Men And Women Think Differently… Oh Really?
When it comes to these types of everyday conversations, they usually don’t go anywhere quick. For most guys, such as Dick, as soon as Jane begins to ramble, he’ll just instinctively begin thinking about problems that he can help solve for her.

But this is a tough one for Dick, she says her neck is sore. Think Dick, think. What about her pants, nope, can’t do anything about that either. Then Jane begins talking too quickly, and Dick becomes overwhelmed with all of the details of Jane’s day, and slowly begins to tune out.

A few minutes later, Dick begins to get that glazed look on his face, and no longer hears what she’s saying. This then frustrates Jane who feels that Dick never listens to her.

The very next day, Dick is more prepared. He’ll zero in more quicker and attempt to solve what appears to be a recurring complaint from Jane, the same issue which Dick has attempted to solve in the past.

Dick then gets frustrated because despite his efforts to fix Jane’s problem at work, she never listens to his advice. To him, all she does is complain about it. To her, he’s just interrupting her, and not allowing her to finish her rant, and gives her advice that she didn’t ask for.

On Completely Different Pages
This is the difference between how men and women think. This has been a problem since the existence of mankind, and social scientists are yet to explain how the male and female brain can effectively communicate with each other.

You wonder why there isn’t any more solutions to these issues online, such as in the “How To Date” manuals, or why it’s not taught in school. So the end result is that both don’t have a clue what each other is thinking or talking about.

Women Always Need To Connect
What you need to do one day is go to an elementary school playground, and watch how the 8 year old kids socially interact with each other during recess.

You’ll see that the boys will divide in their own small groups, fighting for independence and dominance in some type of game, such as soccer.

The girls are elsewhere on the playground, usually in pairs, and are slowly rolling a ball between each other, there’s more talking, connecting with each other.

“So tell me about your day,” is one way to connect with each other at the end of the day. Jane welcomes this opportunity just to touch base, but that quickly dissolves when Dick goes into “man mode.”

Note To Dick: Just relax, just let her talk. Try connecting a bit. Just nod your head and agree appropriately to let her know that you’re listening. Just repeat back what you think that she’s feeling, “That must of really been frustrating, it must of been overwhelming for you.”

Women Solve Issues By Talking
Women have a habit of thinking out loud, verbalizing through the details of every situation. When Jane talks about her day, she’s in the “present” emotionally, while attempting to intellectually and verbally work things out.

She’s deciding what’s important or not, and relieving stress by verbally venting out her problems while sizing up the problems, and then figuring out the solutions as she talks.

Note To Dick: A comedian once said, “My wife always tells me about her day in real time.” It becomes just frustrating to Dick. She’s working things out on her own by talking, so there’s no need to jump in and solve her problems. So just back off, allow her to do so. Just acknowledge her feelings and ask her the details. “So how did you ever manage all those clients?” This to advance her story so she could vent, and not to solve the situation for her.

Men Like To Solve Problems
The majority of men are good at sensing distress and problems, and will actually become anxious when their partner appears to be agitated, or struggling with a problem in some way.

The guy’s attitude is to just “get it done.” So men jump in because they care, and also because of the anxiety that they feel once they sense some distress. “If I can get her to feel better,” as the thinking goes, “then I’ll feel better as well.”

Note To Jane: You can help him out by compiling your conversation much like a news article. So decide that your headline is “Wondering if you’re able to help me figure this out…” then give a quick summation of the day. “Extremely busy today, lots of distractions, annoyed with my boss,” then cover the major highlights, and then your partner will know that he did his duty.

By breaking it up in points, he’ll then be able to keep track, and won’t get bombarded, exhausted, or try to nail down or solve the problem. Giving him just the headlines will help him to relax and just listen.

Men Will Isolate Themselves
Dick is beginning to hate his job, and is thinking about making a change. Then one morning, he says to Jane, “Well, we’re moving to Alabama.”

Jane was completely left out of the entire process. Women feel connected by knowing and speaking what thoughts are percolating. Ideally, Dick should of been talking about his job the instance he felt discontent. But guys just like to deliver the punchline.

Note To Dick: Don’t begin the streaming of consciousness thing, but also don’t just deliver the closing argument. Give her regular updates on what you’re thinking. If you’re reluctant to speak up, or afraid she’ll be upset or become critical, then tell her at the beginning that you need her advice and support. Tell her you need to brainstorm and need her feedback, and her listening to you would be great.

Note To Jane: Just listening is a good thing. Don’t become critical, upset, or begin to micro manage. Your criticism will cause him to withdraw and retreat back into his man cave, or cause him to focus on just your problems. This will just distract him from his problems. So when he’s attempting to solve his own issues, ask how you’re able to help without blowing up.