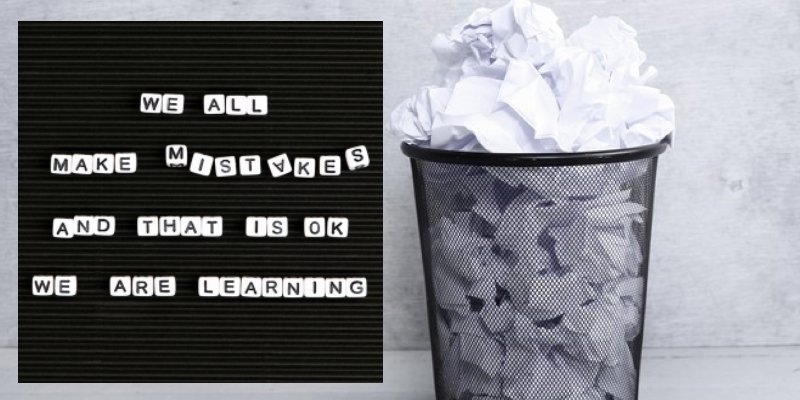 The biggest mistake you can make is to avoid mistakes. It’s considered a fatal error attempting to do things right the first time, or be too scared to try. Mistakes are happenstance of life.

In the impulse results orientated economy we live in, if you don’t fail, you’re not trying hard enough.

The only ones who don’t make mistakes, are those who are timidly living out their lives without taking risks, and not progressing forward.

If you can’t find the strength to accommodate yourself to invite failure, then you can’t succeed in the long run.

The reason being that by making mistakes, doing so has proven to be the key when it comes to innovation, to refine raw creativity.

Making mistakes is the gateway of discovery and solvency. Rare are those times when you learn by doing something right the first time.

Visionaries consider mistakes as a learning process, that the road to success is constructed with bridges of failure. The sooner you fail and then correct and work through them, the faster you’ll find out what works.

Instead, expect and get over them quickly, learn the most you can from them, and then reconstruct. Learn to fail faster so you could succeed quicker.

A World Of Mistakes

Scientists, innovators, idealists, all have created their legacy by being wrong, to make mistakes, usually in big and expensive ways.

Famous inventors actually looked forward to making as many mistakes as possible, because their next attempt might be a success.

Every great leader in their industry has a long history of failing, and are proud to do so.

The failed light bulb, the failed combustion engine, the failed computers, are all proof, evidence that what failure breeds is innovation rather than discouragement.

Not all business failures are glorious. Over 95% percent of new startups fail, vanish without a trace within the first few years. Almost all of them are gone within ten years.

The reason is because they failed to innovate, to keep up with the times. What the economy revolves around is renovation.

If people didn’t do or try stupid and ridiculous things, then nothing that’s intelligent would ever be developed.

The majority of the “old economy” managers want is to take their time, this to make sure everything is thought out and planned to perfection.

That all the “i’s” are dotted and all the “t’s” are crossed. The thought being failure is a waste of time.

This however in the super speed economy we now live in, is no longer the case or viable, as no one is afforded that luxury.

It’s not recommended to slow down or defeat yourself in the development cycle, as speed to market is now the key.

So fail, expect to fail often to find its faults, and then reset and repair as quickly as possible.

The idea is to discover and then turn them over as rapidly as you can, regardless of how painful, embarrassing or expensive it may be.

The new innovators of the world encourage making mistakes. There are now some leading edge companies who even rewards the best mistakes. So offer a bonus for the most creative yet flagrant fractured idea.

There are far too many companies who claim they encourage or expect mistakes, but in reality, they intimidate or punish those who makes them.

Instead, train these developers to savor their mistakes, while precisely documenting the path that got them there.

The Process Of Prototyping

The prototype process for many might sound like a highly industrial term. What it simply means is doing things as quickly as possible, without it being in its completed form.

The process includes expecting to make mistakes and having flaws, and then fixing them as quickly as possible.

Get something up and running, anything that somewhat resembles your ultimate vision. Then revise what isn’t working, and then tweak and tweak again.

This is found to be the best way for product development, or advertising online, known as “trial and error.”

When things do go wrong, never go searching for those who made the mistake, never cast blame.

One reason why mistakes go undetected is that those who made them, don’t wanted to be accused or humiliated for their error. So instead, they’d rather hide or deny them.

Breakdown And Build Back Up

Once any project or advertising campaign steers off course or there are no conversions, treat it like a revolution.

This instead of wasting time and energy finding out who did what or did wrong. Solve the problem and get yourself back on track.

Realize mistakes are part of the process, the bigger the blunder the better, and there should never be repercussion, blame or admission of guilt.

Create a team of learners, those who’ll oblige to a policy of never pointing fingers. Realize there are more funnels leading to mistakes than there are solutions.

Learn from mistakes, debrief everything, whether it be good, bad or indifferent.

Use the following steps to dissolve any mistake:

One method of getting things moving on a project, is by declaring a “state of emergency.”

What emergencies do is they activate people, bringing out the do whatever-it-takes attitude.

This especially once they understand that making mistakes, are part of the process and a team effort and no one is ever to blame.

Establish a level of quality which goes beyond making “mistakes,” and make it a viable economic business model.

Unless the outcome impacts life or death, the cost of perfection can’t be justified. Use the mistakes you’ve made as opportunities to improve the process.

Always keep in mind the key to making progress in this busy world, is by making mistakes and then fixing them as soon as possible.

The Energy Needed To Attract Money Turning Into Prosperity