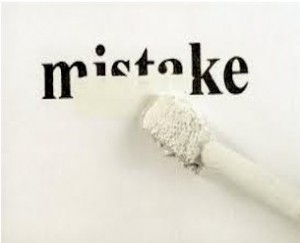 Everyone makes mistakes, they are unavoidable, although nobody really wants to make them, they happen. So how you learn and then react from making these varying degrees of mistakes is the key on whether you move forward in your life or stay stagnant.

There are actual studies performed on how the brain reacts when a mistake, an error in judgement, is made either publicly or privately. If someone happens to make a glaring obvious mistake, it comes down to how you react to them. There were two different results on the two different study groups which were tested.

In both of these case studies, the participants received immediate feedback regarding whether they made the right decision or not. They were also given an opportunity to try again, this based on what they learned from their mistake.

What appeared was there were two different but typical responses on how the brain reacted when it came to making mistakes. The first response was much like a “wake up call” for the respondents.

What the brain did in this case was it focused on the negative outcome, and then treated it much like a problem or situation which needed to be solved. The brain attempted to resolve what happened and why it happened. This was mostly the computer group which was more analytical.

In this case, this group increased its concentration level during the next decision that it made, as if attempting to prevent another repeat of the mistake. Once this occurred, the individuals were more than likely to improve their next performance since they learned from the previous mistake.

The Second Response To A Mistake
The second response on how the brain responded when an obvious mistake was made was it appeared to begin to systematically shut itself down. The brain in this case decided to treat this negative feedback as a threat and failure.

So in an attempt to escape this bad feeling after making a mistake, or to begin doubting it’s own ability, the brain then decided not to think or wanted to make another mistake.

For those individuals whose brains showed this type of reaction of shutting itself down, it paid a lot more attention to receiving external positive feedback rather than a negative bashing.

The researchers regarded this second response as evidence of what’s known as confirmation bias. What these test subjects wanted to do was feel good about themselves, so they decided to pay more attention to receiving feedback which was more consistent with their own self-image. Once this occurs, the performance usually won’t improve, while failing to learn from the mistake that was made.

These studies also found a predictable response pattern on the subjects which paid more attention to the mistake, and the brains which decided to shut down after making that mistake.

Those Who Think That Intelligence Is Stationary
These individuals believe that once they get really good at doing a certain task, it’s because of dedicated practicing and not because of innate intelligence. So it’s important for them to pay more attention when they actually make mistakes.

These are the people who believe that their intelligence is fixed, that they can’t get any smarter or have the capacity to learn new things. They think that they’re either good at doing something, a certain trade for instance, or they’re not. Thus, they will usually pay a lot less attention to, and won’t mostly like learn anything from the mistakes that they make.

The “medical group” were the ones who were least likely to pay attention to or learn from the mistakes that they made. They were more than likely to display some type of a confirmation bias. What they did however was trust their judgment a lot more.

Not Learning From Mistakes
Had the study been real for the medical group, the end results would of been disastrous for their patients. The majority didn’t learn from the errors that they made. Even the most experienced of these medical students ended up using the wrong criteria when prescribing medication to their patients.

So the lesson that anyone could take out of these studies is once you do make a mistake, or as a result of doing so receive some critical feedback, you shouldn’t panic.

Rather think that it’s an opportunity for further learning, and keep in mind that the actual process of making mistakes, when you decide to pay attention, will most likely and more often lead towards ultimate success.