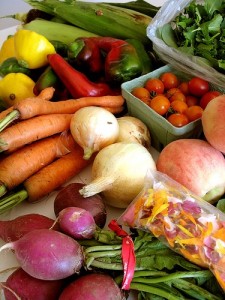 There is now scientific proof on something that we already know, and that’s eating Fruits and Vegetables are good for you. But it’s reassuring to know that what now it has some valid nutritional backing. The study investigated whether eating fruits and vegetables in abundance over a significant period of time protects us against decline in brain function and cognitive abilities when it comes to aging.

The study was conducted on a significantly large group of aging adults, all between the ages of 40 to 60 years old, which adequately satisfied the range of all dietary as well as cognitive evaluations and habits, specifically over a lengthy period of time.

The study which was performed over a period of decade was designed to get long term results including decay. The test subjects were asked to track and maintain detailed records of their daily eating habits under preassigned diets.

They were evaluated first at the beginning of the study and then at the end of the period on a variety of cognitive functions such as verbal memory and higher executive based function ability such as mental flexibility and active decision making.

Different Fruits And Veggies Good For The Brain
The diets consumed were a combination of a variety of fruits as well as vegetables, which specifically excluded potatoes, certain dried fruits and legumes, as these foods potentially introduced complications which may of interfered with the outcome.

The individual consumption of these specific nutrient groups were monitored. The test subjects were first allowed to choose how much of each diet category that they wanted to consume on a daily basis.

So the daily intake of each of the nutrients varied depending on the individual. This choice was allowed since it closely reproduced how the majority selects their daily nutrient intakes.

The Results Of Eating These Different Food Groups
It was discovered that eating the various fruits and vegetables all have their own unique as well as significant beneficial effects when it comes to the variants and reactions of how the brain functions when under stress and during the aging process.

When the different fruit and vegetable diets were examined, and more specifically, the diets which consisted of just fruits which contained vitamins C and E were tested, it was found that they primarily benefited just the verbal memory scores.

To test this, the subjects were asked to remember up to 50 different words. They were then asked to recall them directly after a time delay, while adding stress related distractions. If this happens to sound a little like your current job, then the consumption of foods containing vitamins C and E is recommended.

The diets which consisted of just primarily vegetables which contained heavy concentrations in beta-carotene rich foods, such as carrots and beets, were actually negatively associated with any significant executive functioning based scores, but tested better in other areas.

So if your current job involves a lot of making difficult managerial based decisions, then you may be wanting to avoid any of the beta carotene based diets. These are the fruits and vegetables which typically have a bright orange or yellow pigmentation to them.

You Are What You Eat
This study was extremely valuable since the tests determined what the exact effects are on the specific groups of foods we consume over a long period of time. It also revealed what effect they have on actual brain function.

Clearly, it’s been proven that what we eat can directly influence how we look and feel and how our minds function. As a bonus, these rich produce based diets can also effectively reduce the risk of cardiovascular disease along with a host of other diseases, and you’ll be a lot thinner while doing so as well.