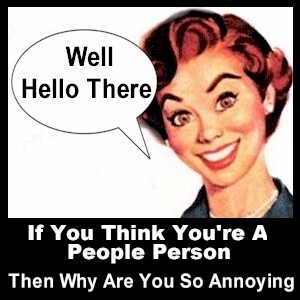 There’s always certain annoying people in our lives whether at work, or it could be a family member who always constantly challenges you. They’re always looking to complain or pick an argument, as it’s their ego which directs the drama that they cause.

They doing so allows them to ruin your day or lives if you allow it, as they’ll affect your livelihood some how. This regardless if they know what they’re doing, or how shallow they may be. There are ways however of dealing with these types of individuals.

What you initially need to do when handling someone unsound is by maintaining your composure, and not getting sucked into their trap. The less reactive that you remain, the more you’ll be able to exercise better judgment which handles the situation or challenge.

Whenever you begin to feel upset or are getting angry with someone, and before you happen to say something that you’ll regret, step back, take a breath and gather your wits and forces.

In the majority of situations, once you do so, you’ll usually have decided on a better way of communicating or diffusing the issue, as you’re wanting to eliminate it rather than escalating it.

If you still remain upset after taking a “time out,” then step back altogether and revisit the issue after you’ve completely calmed down. Once you practice using this self control, you’ll harness your power better to effectively manage the situation.

Separating The Individual From the Issue
In every situation, there’s usually two elements that’s present. The direct relationship which you have with the individual, and the issue or problem which you’re discussing. It’s important to separate the person from whatever the issue is.

It’s Never Personal Be Proactive
Whenever you feel offended by what someone says or acts, come up with an interpretation of their actions before reacting. For instance, you may think that someone is ignoring your calls or emails, so consider that they may be extremely busy.

Once you stop taking behaviors personally, you can then perceive their true expressions more objectively. Everyone, including yourself, will always think and act for themselves before they react about others, so it’s most likely not personal. When viewing all of the variables on the situation, it reduces misunderstanding.

Always remind yourself that people will generally react to how it affects them first. As long as you remain considerate and reasonable, the behavior from others speak a lot more about them, than it does about you. So become proactive rather than reactive by concentrating on solving the problem.

Are They Even Worth The Energy
Not everyone we come across doesn’t deserve the direct confrontation regarding their behavior. Some aren’t worth the energy. You’re busy and your time is valuable, so unless it’s extremely important, or there’s something at stake, don’t waste your time getting involved with their drama.

Whether you’re dealing with an annoying family member or a difficult work colleague, be as diplomatic as possible while being as neutral as possible, try keeping a healthy distance from them.

There are instances where you can avoid dealing or speaking to them. This when someone has temporary power over you which is situational, or whenever you can gain a certain advantage for yourself.

For instance, whenever you need to deal with someone who annoys you for whatever reason, they can also be helpful in providing analysis or insight from their perspective, so interact with them while exercising your patience.

It’s important to know that most difficult people also have a few positive qualities as well, this especially if you know how to use them to your benefit.

What you have is the power to decide whether a situation is serious enough or worth it for you to confront them. Always think twice, and then fight just those battles which are worth fighting.

Placing The Spotlight Back On Them
Those who may be annoying or are the aggressor will usually pick a fight with someone only when they have the upper hand, so if you remain passive and compliant, you’ll forever be a target.

Most who are aggressive are showing a false front while usually being weak with fear on the inside, and once you begin to fight back and stand up for yourself, they’ll often back down. This becomes true at the workplace or in domestic situations.

Studies have show that these aggressors are usually victims of intimidation and dominance themselves. This however is no excuse for their behavior, but it helps in knowing their motivation.

When individuals don’t like themselves or their lives very much, they feel they need to make up for it somehow. They’re usually the victims first. So realize their behavior has nothing to do with you, it’s more about their insecurity.

Injecting A Bit Of Humor
Try making things lighter by using humor which is an extremely powerful tool. Those who continuously undermines you will always react with their ego first. They don’t care about you or your situation. So diffuse these situations by being as friendly as possible.

When humor is used appropriately, what it can do is expose the truth, which can disarm a difficult behavior while showing your composure and control. Humor is an extremely valuable weapon when it comes to conflict resolution, and there’s different angles of using it to reduce or eliminate the poor annoying behavior someone is displaying.

Create The Art Of The Magic Believe Then The Mystical Arrives