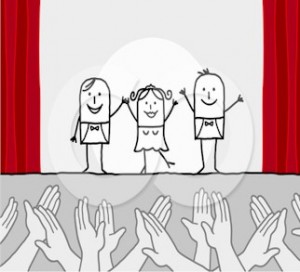 Your hands are beginning to shake, your voice trembling, and there’s sweat forming on your forehead. You’re about to make that memorable wedding toast or address the business seminar. You need to make a 25 minute Speech and are expected to know it word for word. There’s also that list of people that you need to remember as well.

You may find it stressful when it comes to memorizing something, anything, so do what the professionally trained actors do to memorize their lines. They are required, night after night, to reproduce the script precisely, word for word, with no improvising allowed.

So every night during the performance, under the hot blazing lights at the local playhouse, in front of a critical and demanding audience who’s seeking perfection, these talented actors are able to perform their lines without flaw.

So how exactly do they do it? How do these seasoned performers remember hours of lines, in sequence, without making any mistakes by managing to committing everything to memory.

Memorization By Linking
Surprisingly, the majority of actors state that they don’t even bother to memorize their lines in the traditional sense that we do. Rather, they read their script, over and over again, looking for what’s known as the “throughline” by association.

What “throughline” is, is the casual chain or the link which leads one event that’s in the play or scene, to sequentially topple or flow directly into the next line, then the next, and so on.

Every one of the lines of the script is analyzed for clues relating to the situations, relationships, or characters which it relates to. This is the method which is used by a variety of professionally trained actors when memorizing their lines.

What they do is look for the intentions of the characters of the play. Why they do what they’re doing, and most importantly, why they say what they happen to say.

Actors will pay focused detail to every snippet of dialogue since each word reveals a hint of the characters motivations and/or their desires. As they engage into this microscopic processing of the material, then the memorizing of their own lines begin to become naturally fluid.

There is no point in time that these actors attempted to memorize all of their lines independently or directly, but rather they attempt to discern why the character would use the particular string of words to express that exact particular thought or moment.

The Words And Actions Relationship
Another method which actors use to their superlative memories is that the words will often appear intimately connected towards the actions which are performed onstage.

This includes the movements of the cast members which are carefully blocked out during the rehearsal, so that the delivery of the lines are always matched and related to the same physical motions. What this forms is a bodily mneumonic device.

What’s vitally important is that you need to have both of these tracks going at the same time, simultaneously. As one actor eloquently described, “This is what I need to say, and this is when as well as where I need to move.” What happens is that one will always feed the other, as they’ll simultaneously move and then deliver their line, this in synchronized movement of fluid speech and action.

Then Add A Little Bit Of Emotion
Then the emotion which the actors bring to their parts, burns the words into their memories. Acting shouldn’t be considered a dry recitation, but rather an evocation of actual emotion as well as the visceral feelings which is brought forward on stage, making the words which go with them, much more difficult to forget.

Since these principles were enumerated by successful actors, the three components of performance: the deep processing, recognizing physical movement, the emotional associations, all find support in the scientific definitions of memory.

Your Next Speech
So the next time you’re up at the podium and you need to remember something by heart, take a cue from these finely tuned actors who are required to learn lines for a living.

Attempt to find out “why,” or what the reason is, as one actor described as their exact process of looking for the deeper meaning which is behind a string of text. Try to combine the words that you speak into the movements that your body makes.

This includes the gestures which you proffer during certain points of the speech, for instance, or the welcoming posture which you adopt when you greet new acquaintances. Then try infusing your delivery with a bit of real emotion, and then take a bow as the applause will most likely follow.

Is Dieting Or Exercising Better For Losing Weight