Confessions Of An Online Digital Multitasking Workaholic
Skip to content 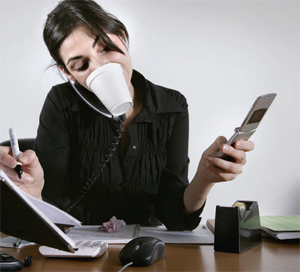 Working too much and nothing much else, these are the boring people that you see everyday walking around with bags under their eyes and a phone stuck on their ear, creating their own form of zombie.

They are workaholics, which is now actually defined as a condition, and yes, there is a term for it. Working at ones job excessively can cause conflict as well as friction at the expense of one’s health or relationships. If left untreated, it can potentially lead towards burnout, depression and ultimately illness. A Workaholic is simply unable to disengage themselves from their work, regardless if they contribute or are really needed or not.

So when it comes to the digital world, when the switch is always “ON” 24/7, the trend towards working too much goes into overdrive and on an upward trend. The lines become narrow and blurred as our work becomes more encroached with our private leisure lives. Are you considered a workaholic if you check Twitter every few minutes while your standing in line at Starbucks?

Definition Of A Workaholic
What may be more of an indicator is looking at the context of what you’re doing. It may begin simple, such as answering an email from your client on Sunday morning because, well, they happen to be in a different area from where you live, that’s what you rationalize anyways. But you’re now mixing the work and play balance.

Then the next thing you know, you’re reading all of your work related emails on the weekend or late at night. The work cycle then progressively begins to lengthen while your rest times get shorter.

Researchers who are studying this trend found that because of the increasingly available mobile environment, and the growing need for email and text message communication, it’s becoming a habit.

The results, whom the majority tested were IT based professionals, discovered some other interesting findings. There are those who find it necessary to always be connected online and to their work, even if it means interrupting dinners or daily activities to check their devices, and these workers are also willing to drive greater distances to get Wi-Fi connectivity.

Workaholics On The Uptrend
If you’ve ever clenched your fist in anger and cursed at the sky as you have your mobile device stapled to your ear, and all you’re searching for is a clear reception, you know the very feeling.

Getting crystal clear connectivity wherever you are has now become a vital lifeline. But then, what’s the real panic. Why is it so difficult to disengage ourselves from the online digital world. Is it really our work that we’re so concerned about, or is there some underlying fear that we will miss something, even if we disconnect ourselves online for even a few minutes, we’ll go into a full raging panic.

The majority who were surveyed admitted that they all check their work email after work hours, usually using their smartphones. While the number dropped during weekends or on their days off, the majority of users will continue to take their work home with them and wherever they go. Just a decade ago, this was completely impossible as the only way to access email was at work during business hours.

Over 50% percent surveyed took some type of work-related device with them when they go on vacation, while a similar number admitted that they will routinely drive more than 10 miles out of their way to get online access.

What this demonstrates is that in order to stay competitive in this tough global economy that we currently live in, it now requires constant productivity, or it could also indicate that the nation is completely addicted to online multi-tasking anytime and anywhere.

Growing Online Epidemic
There is a growing indication how attached people are becoming to their mobile devices, specifically smartphones and tablet PCs. Over a third of the respondents indicated that they’re exclusively using their personal mobile device for business purposes.

So is the digital reliance now becoming an addiction. What it does is it informs what our behaviors are. The good news however is that we’re beginning to get smarter when it comes to appropriate or inappropriate behavior when using our mobile devices.

Take texting when your driving for instance. Stricter laws now prohibit using mobile devices, specifically texting while driving as it has significantly increased the accident rate, and as a result, the awareness is making an impact.

They found that there were still 47% percent of the respondents who admitted that they still drive while they text or talk, which sounds much like drinking and driving. But this trend is significantly reducing from 79% percent who text and drove the previous year.

Some Other Findings Regarding Online Usage
• Having and enjoying dinner with friends and family should represent quality time, but online users still find out who contacted them during meals. There were over 56% percent who admitted that they at one time sent emails while having a meal. If you’ve ever been enjoying dinner and then someone obviously checks their mobile, you know how annoying and how alienated it makes you feel.

• Those who like to multi-task on their mobile devices while they’re out shopping is increasing, as over 65% percent admitted that they either emailed or texted while standing in the grocery line, or while using the mall bathroom. So obviously the trend is that most users are now unable to even miss a minute of connectivity.

• There are however some things which still remains sacred, as the number of users who email or text during a romantic moment has actually decreased. That’s one multitasking activity which definitely hasn’t gone seriously awry!

So you have to realize how close you are to your smartphone. How would you react or handle yourself if you happen to lose it or left it home for just one day?

How To Set Up Your Google+ Plus Brand Page For Businesses