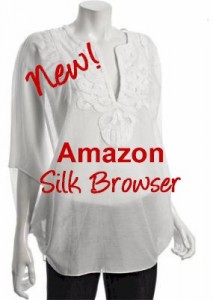 The recent releases of new tablet PC’s along with their web browsers are pretty much routine and common these days, at times eliciting yawns rather than increasing the pulse rate.

But Amazon and their brand new Amazon Silk browser for the Kindle Fire tablet, which is driven by Google’s Android 2.3 Operating System may perhaps be changing all that.

The basic fundamental idea of this browser which is designed to surf the web employs a “splitting” method for it’s browsing functions, first to act as a mobile device and then to access Amazon’s cloud service.

This idea however isn’t really anything new as it’s been tried in the past, most recently and notably by the Opera browser. But the chief Internet retailer that is Amazon appears to have taken this idea to a completely new level.

The Silk with it’s duality gives it a lot of benefits, but there may be some obvious drawbacks as well. So here are some of the good as well as a few bad points regarding Amazon’s Silk browser.

Since the majority of the tasks which are involved in fetching and then rendering web pages is performed in the cloud, Silk is able to retrieve results a lot quicker than your typical mobile tablet based browser.

Also, because some webpages may be required to access multiple domains as well as download numerous files, dishing these time consuming tasks off to the much quicker cloud servers in Amazon’s Elastic Compute Cloud service, also known as EC2, frees up a lot of your bandwidth and computing resources which would otherwise be consumed locally by the tablet.

Allowing for the rendering of these webpages directly in the cloud allows the browsers cache size to be reduced significantly as well. This obviously saves storage space which is always critical on any portable mobile device with limited storage.

What the Silk browser is able to do is always keep its connection to Amazon’s cloud open. This reduces latency, which is the time lag which occurs between issuing a certain command and the function being completed, this when you launch the Silk browser and begin surfing the Internet.

Directly syncing Silk onto Amazon’s cloud also allows for usage of its “predictive technology,” which guesses what or which web pages that you’ll be asking for next, even before you actually ask for them. This also speeds up time as well as performance.

One other advantage of using Amazon Silk is that it has the ability to tailor the content to the Kindle Fire’s screen before it actually reaches the device. So any larger images on a webpage are compressed to meet the actual size requirements of the tablet’s screen.

Amazon claims that even any JavaScript code which is found on websites can be compiled by its servers, which boosts the page’s performance on the tablet.

The end result and easy answer is that the delivery of web pages called from the Internet consumes a lot less bandwidth while performing better when displayed on the Silk browser.

When using Amazon’s cloud computing service to act as a middleman between the Internet and you using the Kindle Fire tablet Silk browser, it may raise a few questions regarding privacy.

For example, if you’re concerned about Facebook tracking your web activity if that webpage happens to contain their “Like” button, then your anxiety and worry level may rise significantly at the potential of Amazon possibly tracking your every move while on the Web.

Amazon claims that the information they gather will always be kept strictly anonymous and confidential. But it really becomes a gamble to everyone involved if that info will truly forever remain secure. What happens when a lawyer who happens to have a discovery order, or “Big Brother” comes knocking on Amazon’s door demanding to look into the data. Will they need to comply?

Complete security may also be an issue while using the Silk browser. Since you’re always interacting back and forth and relaying data with Amazon’s cloud service first, you’re not directly interacting with any secure websites.

For example, say that you happen to log into your online bank using your Fire tablet. You need to be aware that the “login” information is first recorded on Amazon’s cloud, which then conveys it forward to the bank. So you need to ask yourself, do you really want Amazon to be between you and your bank, tracking your every move.

To credit Amazon, you do however have the option of turning off Silk’s cloud features and using it like a typical web browser. This would obviously address the privacy as well as the security issues which may arise. What you’ll lose are the advantages of processing the browsers activity in Amazon’s cloud however.

One other potential problem related to not being able to receive content directly from a website is that you’ll never know how long it actually took Amazon to configure the content that it sends to the Fire tablet. When it comes to cached pages, you have no idea how long the pages have been sitting inside the cloud.

Also, there may be certain times when you’re not wanting the compressed content which is retrieved from a site. For example, you may be wanting the full 3MB photo instead of the compressed 30KB version of the same image which the Amazon cloud sends you.

Ultimately, the Silk browsing approach may potentially pose problems for all web surfers if it proves to be successful. If the other major web browsers who also offers cloud services decides to adopt the same Silk model, then major web browsers such as Apple, Microsoft and Google may use this method and may also decide to record your every move as well. Don’t look now but someone is watching you.

Why You So Mad Learning To Take Control Of Your Anger