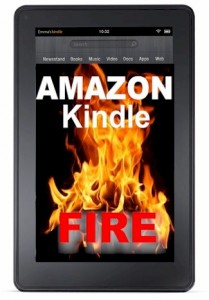 The fire is starting. The Amazon Kindle Fire Tablet is expected to burn off the shelves. This dynamic entry into the already crowded tablet PC firestorm was extremely hard to miss. Amazon made a huge statement when they introduced the $199 price point and yet, some may still be underwhelmed.

The Amazon Kindle Fire tablet is finally exposed. The demo of this new tablet was put through its paces, showing off its various technical features. This however to some, may of not be the perfect Amazon tablet that most were expecting.

A lack of an on-board camera for one, or no GPS capabilities, 3G or a microphone. But keep in mind it’s their first version and you have to love its price.

The rumor mill was in overdrive with the promise of a potential iPad killer for months. Amazon and their variety of services which they offer is actually the only company who’s capable of creating an integrated tablet PC which can possibly compete with Apple.

What Amazon introduced with the 7″ inch Kindle Fire Tablet is a portable device which is expected to be a host docking station for the various content based services offered by Amazon and their cloud computing services.

First… What Amazon May Need To Improve On

This first version of the Kindle Fire may be limited in a few ways. The Amazon Kindle Fire uses a modified version of Google’s Android 2.3 OS with it’s own unique interface as its operating system. This version of the Android is however more suitable for the smaller smartphone resolution rather than the larger tablet screens.

To begin with, the most obvious and notable is that it only offers 8GB of storage space. 8GB these days in a world of 1TB hard drives is not a lot of storage, so say hello to their cloud services.

Although this is the same as any other base tablet, 8GB of storage equates to approximately 20 – 2 hour or so movies which you can store on the device. You would need to be extremely selective on which digital media you’re wanting to keep. So you can forget about loading the entire 8 seasons of Entourage as you’d need to properly manage the available GB space for your other videos, data and music.

You’re able to load your own content, such as say your videos, but you’ll need to use your own app to play or view it. The on-board video player is strictly for the streamed content which is available from Amazon. There’s also no image gallery which is available where you can show off your photos. You’ll need to find a separate Android app for that as well.

One other limitation may be the selection of the apps themselves. There will only be a limited number which will be made available on Amazon’s Android Appstore.

The number of apps which are initially expected to be available is around 10,000 or so of the over 200,000 apps which are currently available on the Android Market. But the availability should obviously increase significantly over time.

One issue regarding the limited apps is that Amazon was a little uncertain whether the Kindle Fire was completely compatible with all of the other applications in the entire Android universe.

So because it runs on a modified version of Android v2.3, it’s still not known whether the newer apps which would be created for the Android 3.0+ HoneyComb or the upcoming Google Android Ice Cream Sandwich OS would even work on the Kindle Fire tablet.

So if you’re a potential buyer of the initial offering of the Kindle Fire Tablet, you’d most likely want better reassurances that all the essential Android apps will be usable on the tablet.

According to Amazon, the developers should be able to make the necessary “tweaks” to the Android operating system, which are expected to be minimal, for any potential app compatibility issues.

Although Amazon hasn’t even seen the Ice Cream Sandwich OS as of yet, shouldn’t the developers at least have a basic idea on the direction which the OS is headed, and how it will fit in with the Amazon Fire.

What’s also not known is the exact quality of the LCD screen when it comes to reading off of it. Some tablet manufacturers will focus intently on how much glare there is on their screens and the efforts taken to minimize it.

Amazon’s Kindle Fire offers a resolution of 1024 x 600 pixels with 169 pixels per inch. So compared to others on the market:

The dots on the Amazon Kindle Fire were visible when compared to the RIM PlayBook. This may be because of the Android 2.3 OS font rendering.

The Advantages Of Owning The Amazon Kindle Fire Tablet PC

Amazon hits a home run with its Kindle Fire in a few areas. The biggest attraction of course is its price. The $199 Kindle Fire cost falls into that price area where it won’t make much of a dent in one’s pocketbook. It even borders and teases on almost being considered an impulse buy.

Another excellent feature is its immediate on-board storefronts for their Kindle ebooks, the available Android apps, the TV shows and movies, which is presented in a visually appealing manner.

The tablet’s compact variety of storefronts, coupled with Amazon’s vast selection of TV episodes, movies, ebooks and music, instantly sets the Amazon Kindle Fire apart from its competition of the generic Android tablet market. There’s a seamless bridge between the tablet and Amazon’s various services and content which no one else other than Apple can offer.

The Kindle Fire with their extremely consumer friendly price, the Android OS system and the immediate connection to their outstanding services obviously makes this device an excellent and enticing option. This especially for families who are wanting to have a family orientated mobile tablet device for their kids to use without having to pay the usual $500.

Amazon’s Various Services A Plus
The Kindle Fire, which uses a “free storage” cloud accelerated browser called Amazon Silk, is designed to be an entertainment gateway for the variety of Amazon’s free as well as paid products and services.

However, not being able to install any “outside” Android apps and the tablet not being able to do much more than using email and sharing your images etc., makes it feel a little limited. So you have to wonder if the Kindle Fire even really qualifies as a true tablet PC, or is it just an extremely smart content showcase mobile device.

The Kindle Fire may not be able compete with the iPad in terms of features or be able to even compete with some of the more functional Android based tablets on the market, but then, maybe it’s intention isn’t to do so, but to rather create it’s own pocket niche.

Amazon with the Kindle Fire tablet is obviously doing their own thing, developing it’s own market following much like what Apple did with their iPad, by going after their own unique audience base.

The Definition Of Adaptation How The Body Adapts To The Environment