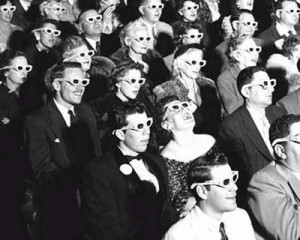 3D entertainment has actually been around for a while. Decades ago, there were the whacked out cheesy red and blue paper glasses that they handed out at the movie theaters. But lately, 3D entertainment has taken a serious jump from the silver screen of the 1980’s, directly into your living room. This is thanks to 3D Blu-ray discs, (BDs), 3D Television channels, and the 3D compatible HDTVs.

The next evolution is the step towards allowing you to make your own home based 3D videos or taking your own 3D photos. It may also surprise you that this technology is already available right now, and you can produce these 3D creations right away!

How 3D Technology Works
What videos or taking pictures in 3D requires are two identical images which are slightly ‘off,’ or misaligned from each other, yet they are the same subject. The images must also be captured from vantage points just a short distance aside from each other, similar to how you would view the same object with your left eye, and then from your right eye.

Once the image is taken, the footage or picture is then played back in a way that your eyes will see the two perspectives completely separately. It is an illusion that plays tricks on your mind, making it believe it is “seeing” an actual three-dimensional scene.

3D Digital Cameras
A three-dimension still image camera will be able to take the two required pictures simultaneously, by using a dual lens as well as two image sensors. A 3D compatible camera with a single-lens, will snap frames at a high-speed in panoramic mode, allowing you to press the shutter button just once, while moving the camera from one side of the subject to another. The camera will then use slices of the panoramic shot you just took, and automatically create a 3D still image.

3D Video Camcorder
A 3D Camcorder usually has a single lens, but by adding a specialized attachment which has two lenses, will allow you to shoot your own 3D movies from home.

How To View 3D Images Or Videos From Home
In order for you to view your home made 3D media creation the way it was intended to be seen, you’ll need either a TV that’s 3D-compatible, a computer monitor that’s 3D-compatible, or any other 3D viewing device. These displays will allow the left and right images or the 3D video frames, to be viewed so that your left eye will only see the content that it was intended for. This also goes for the right eye.

Will still need specialized eye wear which is designed to hide the right view from the left eye, or vice verse.

LCD shutter glasses, which is the most common type of 3D eye-wear that’s available, looks a lot like a regular pair of sunglasses. What happens is the lenses will alternate or ‘shutter’ between translucent and opaque states at quick determined rates per second, while the 3D TV will continuously flash the left and the right images onscreen.

3D TVs will usually synchronize these images with the 3D glasses by transmitting a wireless signal. If the TV and eye-wear combination inadvertently allows your eyes to catch a wrong glimpse of the frame or image, which is known as crosstalk, it will then make the 3D image blurry.

There are also a few devices you can use where 3D glasses are not needed. For example, there are certain computer monitors, as well as hand held viewers that uses special layers of lenses that directs the image to your left and right eyes, producing the 3D effect. The only drawback to this method of 3D viewing is that you will need to be directly in front of the screen, otherwise, the 3D illusion will be lost.

Creating Your Own 3D Photos or Videos From Home
You will need a specialized 3D camera or a 3D camcorder to be able to create your own 3D home videos or images. You’ll also need a display device to show your 3D creations.
Say for instance, that you, your friends or family are wanting to view your latest 3D production. Each one of you will need a pair of the LCD shutter glasses to be able to view the images on a 3D TV. An alternative method would be either a 3D-capable computer screen, or a hand held 3D viewer.

If you’re looking for the latest in 3D Home Theater experience, you should be considering purchasing an additional component, which is an A/V receiver with 3D pass-through support. This will allow you to run your 3D video footage through your in-house surround-sound system, without losing any “lip sync” with the video on your TV.

In Full Vivid 3D
One of the ways that 3D can impact your life, is by you making your holiday landscape photos ‘pop and sizzle’ instead of fizzling out. If you like to travel, you will most likely take a number of pictures of your trip, printed out on flat boring 4×6 prints. Now imagine an image of the gigantic waves in Waikiki Beach in full and awe inspiring full 3D. It will make a ‘splash’ like you are there.

As for videos, when you take home movies of your kid’s baseball game, it will not garner much attention and will quickly end up on the video shelf. That is unless you decide to shoot it in full vivid 3D video jumping into your living room. There is absolutely nothing like a football or a basketball dunk giving a definite presence. When your viewers instinctively lean back and out of the way of incoming objects, you will immediately know that your 3D home videos are going to be a big hit.