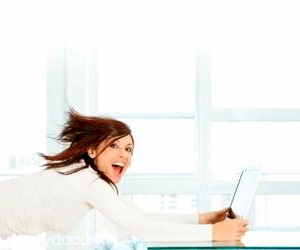 In this life that we now live in of wanting everything quick and instant, we’ve learned to become tolerant when it comes to a slow reacting Computer in the home or office.

But that no longer needs to be the case if you’re in the market for a new PC, as they now can be lightening quick, or at the very least faster than what you’ve had in the past. What it comes down to is the hardware specifications.

So when you’re ready to select the computer that you’re wanting, and depending on your budget, hardware which is dedicated to higher performance is what you should be looking for.

When picking out the specifications of the computer, all what’s required is paying attention on a select group of components which focuses on faster data processing.

It should be noted however that if you’re shopping for a laptop, you may decide to trade off some graphics, or CPU, or additional RAM speed in exchange for a battery which offers a longer life.

Getting A Solid State Drive Instead Of A Traditional Hard Disk Drive
The newer solid-state drives (SSD) are seriously able to reduce the finger tapping time that you usually spend waiting for your laptop or desktop computer PC to respond to any of your commands. This includes initially booting up the PC as well as launching any apps or software programs.

A Solid State Drive may also increase the life of your battery as well when compared to the traditional slower Hard Disk Drive (HHD). SSD’s currently cost a bit more per GB than HDDs, but the increase in speed and performance boost is absolutely well worth it.

Speed Specifications For CPU’s
When you’re comparing a particular Central Processing Unit (CPU) family class, the higher that the clock speed is, such as say for instance 3.2GHz, the quicker it is.

The latest chips which are available today are also equipped with automatic features which includes options such as Intel Turbo Boost, which will instantly and temporarily increase the clock speed when it’s the most beneficial.

It’s also recommended that you get at a minimum 4GB of DDR3 RAM memory. The higher the RAM frequency is, such as say 1600MHz, the quicker they are.

Counting The Cores
The more processing cores that there are in the CPU, the better when it comes to doing various tasks such as changing the media files to mobile device formats, for instance, or for compressing folders, encrypting private data, or transferring data online. It also contributes to overall quicker and smoother PC performance as well.

The central processing unit (CPU) which are equipped with Intel Hyper-Threading, have cores which are able to act like double cores when using certain software or apps.

The latest of the available PCs may astound you with their improved and expanded capabilities. They are powered by visibly smart and swift 3rd Gen Intel Core processors.

So these new computers are able to deliver amazing performance as well as stunning visuals, with features which gives the PC the ability to be able to adapt to any of your needs including multi-tasking.

They also have built-in visual enhancements which provides for a much better experience that you’re able to see as well as feel. You’ll now be able to enjoy a large array of entertainment, create and then share your next great video, and then explore and connect your interests. You’re able to rediscover what’s possible with a computer which is powered by a 3rd Gen Intel Core processor.

Getting Those Great Graphics
The majority of computers now come complete with integrated graphics which are able to handle functions such as Blu-ray Disc video as well as other High Definition (HD) based content.

If you’re also wanting to play demanding graphic heavy games or use heavy software to adequately edit video, you should be considering upgrading to a discrete graphics card. Besides it being able to handling intensive games, it’s also able to seamlessly accelerate media apps as well.