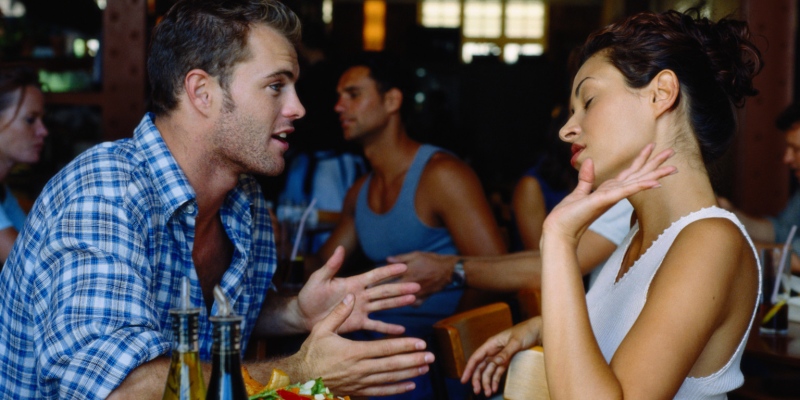 As the song goes, “you keep me hangin on.” You’re currently in a relationship with your latest, and you desperately don’t want it to fail.

You don’t want to appear as a failure in front of your friends and family. So everything is fine, you tell yourself. Things will work out.

So you give your relationship all you’ve got, only to find yourself feeling miserable and unhappy with your life.

What you did was poured your soul, your life effort into the relationship. You hope both of you did.

But you know deep down inside, that gut feeling area where the raw truth resides, your heart remains truly conflicted whether you should stay in the relationship or not.

Your dreams and your eggs are drying up, so you need to make a major life choice.

Start over again, or remain with this person who may not be the exact match for you.

1. – You Start Making Excuses For Yourself

If your partner just had a bad day at work, isn’t a reason why they should be taking it out on you. Everyone has bad days, but you don’t deserve to be the adsorbing sponge.

Their frustration and anger shouldn’t be taken out on you. So if you’re constantly being slammed by their bad mood, it may be time to get out.

Talk about it first, don’t give up hope, but if it remains persistent, the exit door is your best friend.

You’ve been in numerous arguments lately, and it all appears to be about the same thing. It’s always about they getting off their lazy butt and doing something, or the dysfunctional way they’re treating you.

Their attitude sucks, and it’s not improving. They say that they’re committed to the relationship but nothing ever changes.

So decide if you and your pride should be jumping ship for calmer waters.

3. – You Constantly Need To Validate Your Relationship

This to prove to everyone you’re a lovable functional person. You post pictures of your relationship on social media, and you don’t feel validated until your partner also “Likes” the photos on Facebook.

You’re just doing it to show you’re capable of having a relationship, just to prove you’re worthy. Instead, why not be more genuine, not needing to feel that you need to justify yourself.

You come across as an insecure emotional wreck, as you chronicle every step of your relationship online, that you’ve found the “love of your life,” while others feel bad for how empty your life appears.

Sure, every couple disagrees, but the tipping point is once it’s displayed in public. Arguments are usually held behind closed doors, but doing so publicly without shame raises red flags.

When fighting in public, your immature mind can’t listen calmly to resolve the situation. You don’t care what others are thinking at that moment.

It should be embarrassing for you, but so what. If it’s a mild argument, then fine, but once you raise your voice, you’ve crossed the line into cuckoo land.

5. – You Come To Your Own Conclusions

You formulate your own conclusions, in those situations that don’t quite fit, this to cover up and protect yourself, pretending that everything is okay.

For instance, your partner forgets your anniversary, or they don’t bother or detest going to the in-laws for dinner, this because they don’t care about you or the relationship, they don’t care how it makes you feel.

What you don’t bother doing is taking the real reasons into account, but instead, you just cover them up, this by constantly coming up with your own conclusions on what they do.

You feel unappreciated, yet continue to deny it with excuses. Realize that all you’re doing is just lying to yourself.

This will eventually turn into an internal struggle with your heart, which will eventually place a strain on your relationship. Do you really want to continue to cover up and make excuses, for yourself and that person.

6. – They Take You For Granted

What they do is constantly show a lack of appreciation, so stand up for yourself and tell them. Ask them point blank why they do “such” and “such,” and don’t just assume that its for a certain reason. Make them tell you exactly why.

It’s best to realize that it’s a fools game, since you’ll never assume they don’t care about you. Force them to explain why they do certain things, as you deserve the respect.

7. – There’s Too Much Mental Angst

This applies to both partners. What you do is go to sleep and wake up with scars on your heart, and if it’s especially on your body, then consider leaving.

What you most likely do is justify their actions by blaming yourself first, or their past that you’re attempting to tame. You become intoxicated by the volatility of the relationship, and then convince yourself by thinking things are bound to get better.

If they’re willing to commit to working it out, and actually proving it, then there’s some hope. But if they continue to hurt you while promising it will never happen again, then take what’s left of your pride and walk out the door, as they don’t deserve you.

Should I Stay Or Should I Go

If you’re unhappy and you don’t know if you should stay or go, think about the value, the weight of the relationship against the effort you put into it. What you can do is ask someone to change, but you can’t force them to act.

So the question remains, should you give up and move on to greener pastures, or wait for that person to become committed enough to change, this regardless of how long it takes.